As a tundra fire moved closer to St. Mary’s and Pitkas Point on Friday, federal officials urged residents of the lower Yukon River communities to pack essential belongings and plan a way to get out if needed.

The fire was five miles from St. Mary’s on Friday night. It had spread about two miles closer during the day, driven by 30 mph gusts across dry grass, according to the Bureau of Land Management.

Gov. Mike Dunleavy has issued a disaster declaration in response to the fire, which has grown to an estimated 71,000 acres over the last week and a half, according to satellite data.

More than 700 people live in St. Mary’s and Pitkas Point. A road connects the two communities. About 80 residents chose to fly from St. Mary’s to Bethel on Thursday, June 9, and about 60 more followed on Friday.

People have who chosen to leave are mostly elders, people with medical issues, and mothers with young children. They are being housed in Bethel at the National Guard Armory and Gladys Jung Elementary School. YKHC is testing everyone who arrives for COVID-19. Some people are choosing to stay with family or friends in Bethel or travel on to Anchorage.

Meanwhile, federal officials are deploying more resources to the area to try to prevent the fire from reaching the villages. But another fire has ignited nearby, and to complicate efforts, the community water tank in St. Mary’s is leaking.

BLM has sent about a dozen more firefighters to the area since Thursday, increasing its crew to 66, and air tankers are dropping fire retardant around St. Mary’s. BLM Public Information Officer Beth Ipsen said that the retardant will wet the vegetation and help prevent the fire from moving past it to the community.

Even more firefighters are scheduled to arrive. Andrew Flagg of Yute Commuter Service said the airline was sending six planes to fly firefighters in from McGrath to St. Mary’s. Altogether, those planes can carry 30 passengers.

“This is what we call a wind- and fuel-driven fire, meaning that the wind is pushing it through, and the vegetation is very receptive to burning. It’s also resistant to control,” Ipsen said.

Some firefighters are traveling along the river by boat, working to protect Native allotments and fish camps.

A larger team accustomed to coordinating more complicated responses is set to take over Saturday. Temperatures this weekend are expected to remain warm and dry.

Meanwhile, lightning started another fire nearby. This one is burning 33 miles north of Mountain Village and has grown to at least 60 acres. Four smokejumpers have been deployed to the fire, and helicopters are dropping water on the area.

Ipsen said that surrounding wetlands could help contain its spread.

In St. Mary’s, the water level has been dropping in the community’s water tank for days. St. Mary’s School District Superintendent Dee Dee Ivanoff says that it fell 12 inches on June 9, and workers have been unable to locate the leak.

Ivanoff is working with volunteers to raise money through a GoFundMe campaign to buy pallets of bottled water.

“So in case we have to use up all our water, we will at least have potable water,” Ivanoff said.

YKHC is also sending bottled water, and state Emergency Operations Center spokesperson Jeremy Zidek said that the state does not anticipate that St. Mary’s will experience a drinking water shortage.

Meanwhile, on the ground in St. Mary’s, Ivanoff has been coordinating rides to the airport for people who want to leave. Her parents already flew to Bethel.

“It’s a relief to get people out, including those who are elderly and high risk,” she said.

She drove people in her truck while her employees drove others in the school bus and van. She called the scene “surreal.”

Ivanoff said that so much smoke blew into the community recently that it set off a school smoke alarm. She says her sister is loading a boat in case her family needs to leave, but Ivanoff intends to stay to watch the school. 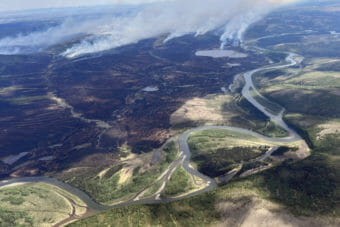 Vulnerable residents flown out of St. Mary’s as major tundra fire closes in

Yute Commuter Services sent all of its planes to St. Mary’s to evacuate residents, and about 60 people arrived in Bethel on Thursday night.