Some Manley Hot Springs residents are frustrated by a lack of guidance and assistance as they begin recovering from last weekend’s major ice jam flood in the Tanana River community at the end of the Elliot Highway.

“You know, people have come out and did a lot of talking, but everything is so slow moving,” said resident Kobi Purdy. “And it doesn’t feel like anything has been done yet, and everybody has all these contaminants in their yard and in their house.”

Purdy, her husband and their three children are among about 50 people displaced by flood damage to their homes in Manley Hot Springs, a small community west of Fairbanks. Purdy said there’s uncertainty about how to proceed with clean up and repairs. She listed fuel oil, gasoline, antifreeze and sewage among contaminants in the flood waters.

“We’re scared to go over and try to touch anything, because we don’t know what’s on that ground or what is on everything,” she said. “I mean, we’ve found dead fish in the middle of the road.”

Purdy, who is trained in oil spill response, says there’s no plan so far for dealing with fuel-tainted flood waters.

Alaska Department of Environmental Conservation staff were expected to arrive in Manley Hot Springs this week, and the Alaska National Guard is also deploying to the community.

The initial focus has been on making sure people are safe and on restoring essential services, said State Department of Emergency Management spokesperson Jeremy Zidek. The next major task is damage assessment, he said.

“The damage assessments will be conducted first and foremost by leadership in the community, working in conjunction with an emergency manager that’s been dispatched from the state emergency operations center, in conjunction with the Tanana Chiefs Conference and others, like the American Red Cross,” he said.

Gov. Mike Dunleavy declared a disaster for the Manly Hot Springs area over the weekend, and Zidek said assessments are a prerequisite for leveraging disaster assistance programs.

“Once we get an assessment of what the damages are there in Manley, we’ll know which programs we can activate and then the Division of Homeland Security and Emergency Management will begin to implement those,” he said.

Zidek emphasized that owners of flood-damaged homes and businesses do not have to wait to begin clean-up and repairs, but should meticulously document flood damage and everything they do to address it.

“Take pictures, take video of the damage, make lists,” he said. “If you make any repairs, and have any expenses, keep receipts for those expenses.”

Zidek said the potential for federal assistance will hinge on the overall severity of Alaska’s break up flood season.

“There will come a time when we’ll be able to evaluate the damage that has taken place statewide from these floods and see if we have enough damages to request a federal or presidential disaster declaration, and that will activate FEMA on the disaster recovery side,” he said.

The state is also monitoring and responding to flooding in other locations round the Interior, including at Circle on the Yukon River and at McGrath, Sleetmute and Red Devil on the Kuskokwim. 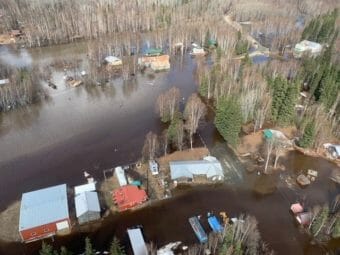 Manley resident Sabrina Jervsjo said there’s damage from the water, and even worse, fuel spills. “I think everybody in Manley Hot Springs purchased heating fuel before the cost went up," she said. “It’s just a sheen across everywhere.”