Painted sneakers designed by Wrangell High School students have won at least $15,000 for the school’s art program and have a chance to win more than triple that.

Along Wrangell’s Front Street, almost every store has the same sign in its front window: “VOTE TO HELP WIN $50,000 FOR THE WHS ART PROGRAM,” it says. “VOTE FOR WRANGELL EVERY DAY UNTIL MAY 6.”

The signs have pictures of two pairs of painted Vans shoes. The signs have also been miniaturized and taped to every till at grocery stores in town.

Junior Paige Baggen led the group of students that entered this year’s Vans Custom Culture Contest, where high schools design shoes to represent hometown pride and the legacy of one of the Vans founders.

“I’m so excited. I’m just—” she said, burying her face in her hands and groaning.

The endeavor has paid off. Wrangell’s shoes made it into the first group of 250 competing schools, then made the top 50, and — after a public vote — made the top 5 designs in the United States.

“It feels really, really good that everybody else in the community also thinks that art is just as important as I think it is,” Baggen said. “It’s really easy to be like, ‘Oh, no one cares about art.’ But no, so many other people feel exactly the same way I do. So many people think it’s so important.”

Wrangell community members made social media groups to remind people to vote each day for the Wrangell students’ shoe designs, and they posted those “Vote Wrangell” signs all over town.

The two pairs of shoes — one pair with Wrangell sunset scenes, another with Lingít-inspired formline art, beading, marten fur and buttons — are proudly displayed in the window of a downtown Wrangell business.

“Just to see how the community has come together, all the support was really, really exciting,” Baggen said.

Former Wrangell students and community members spread the voting link coast to coast. Southeast’s regional Native corporation Sealaska and Alaska-grown rock band Portugal. The Man shared Wrangell’s shoe designs. Some students even got to meet U.S. Senator Lisa Murkowski, who posted a video with them on her social media.

The students see Wrangell’s success is an underdog story. Some of the top 50 schools come from communities of hundreds of thousands of people. Generously, Wrangell has about 2,300 people on the whole island.

“It’s great to see that even with a small community, you can win a people’s vote,” senior Rowen Wiederspohn said. “It really just shows that all you really have to do to succeed in life is to try.”

The art students spent hours brainstorming about what makes Wrangell special, then poured that into the design of two pairs of shoes. Morse says she thinks it shows. When she got the email saying Wrangell had made the top five schools, she says she burst into tears.

“This is probably like the most surreal thing that’s ever happened in my life,” she said. “These kinds of things happen to other people, other people go on game shows and when many other people win contests, other people do this. It’s not something that happens to people like us here at Wrangell.”

Baggen, the lead artist for the shoes, says that she doesn’t feel like it’s a competition, really, now that they’ve made the top five schools — all of them deserve to be there. Plus, each top five school wins $15,000 for its art program.

“We get $500 a year [for art supplies]. If we wanted to save up $15,000, it would take us 30 years. So having this much money right now is literally a dream come true,” Baggen said. “I was reading all the impact documents from the other schools and they were like, ‘We’re gonna build a new computer lab filled with iMacs, and we’re going to create a new department and blah, blah, blah.’ We set out being like, ‘I hope we get some money so we can buy some new paints, or some new paintbrushes.’”

High school senior Sophia Hagelman says one of the best parts of the experience is the opportunity to feel like they’re giving back to the school in a meaningful way.

Junior Cassady Cowan says she feels like the Vans Custom Culture competition has put Wrangell on the map.

“You have to tell someone where we are, point us out [on a map],” Cowan said, “Just a little island turned into something bigger, look where we ended up.”

The top school in the competition will also win a visit from Vans officials and a school-wide barbecue, among other prizes. The winner of this year’s competition will be announced the week of May 16. 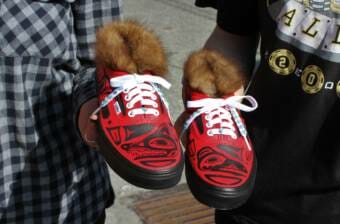 Wrangell students say they’re confident in their two painted pairs of canvas sneakers that could earn their school’s art program up to $50,000 in prize money.