The driver of the truck carrying the trailer escaped without injuries, according to the United States Postal Service.

But the truck and the mail inside were a total loss. The truck was delivering mail to communities throughout the Kenai Peninsula.

James Boxrud with the USPS said the driver was coming from Anchorage and was around milepost 38 of the Seward Highway, not far from the Tern Lake Pullout, when he noticed in his side view mirror his trailer was engulfed in flames.

“If they’re able to disconnect their vehicle from the trailer, they’re supposed to,” Boxrud said. “And that’s what he did.”

Volunteers from Cooper Landing Emergency Services and the Moose Pass Volunteer Fire Company got the call around 12:40 a.m.

Cooper Landing Fire Chief Riley Shurtleff said his department was on the scene about 20 minutes later. He said the fire had already decimated half of the truck.

“In a contained environment like that, it was an incredibly difficult suppression and extinguishment effort,” Shurtleff said.

One thing that made it hard to put the fire out, he said, is that the area has limited access to water.

“We ended up sending a water tanker shuttle with Moose Pass Tanker One to the closest available fill site, which was at the Kenai River in Cooper Landing — about 16 miles one way,” Shurtleff said.

The USPS said the cause of the fire is unknown and under investigation.

The agency has seen its vehicles go up in smoke before, most recently in Ketchikan earlier this year.

But that was a mail delivery truck, while this one was a trailer. Boxrud said the only connection between the two is that they’re both USPS vehicles.

The postal service said it will send letters to affected customers and asks those who are expecting mail and packages to call the Postal Service Call Center at 1-800-275-8777. Claims for packages can be filed on the USPS website.

One type of mail that was not impacted by the fire was the incoming slate of ballots for the upcoming by-mail special election. Tiffany Montemayor with the state Division of Elections said those ballots are being mailed out Wednesday and will take a few days to come in, since they’re shipping from a printer out of state. 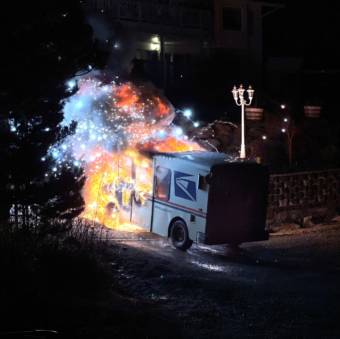 Friday night in Ketchikan, a mail truck went up in flames

“It started in the front, it blew out the windshield, it popped the tires. The fire was so intense that it actually burned holes in the sides of the door," said Jeff Fitzwater, the photographer who captured spectacular images of the fire.