Ed Houston sipped an iced coffee at the Ted Stevens Anchorage International Airport on Wednesday as he waited for his flight to Seattle. The Bering Sea boat captain had been at sea for weeks and said he was surprised to see how few people had masks on at the airport.

“I noticed nobody’s really wearing it,” he said.

He was planning to wear his mask on his next flight. He said he’s vaccinated and not worried about catching COVID-19 himself, but wanted to make sure he didn’t inadvertently spread it.

“’ll just wear it and take it down if I’m eating or whatever,” he said.

Houston was in the minority, though. Most people at the airport in Anchorage weren’t wearing a mask on Wednesday afternoon. A few recent travelers estimated that just 10% of the passengers on their flights were masking.

Wearing a mask became optional earlier in the week after a Florida judge ended the federal government’s mask mandate that covered public transportation. At the Anchorage airport, that meant travelers could now decide to not wear a mask for the first time in roughly two years. That left some people celebrating, some worried about their health and many somewhere in the middle, like Joe Hansmeyer.

Hansmeyer wasn’t wearing a mask at the Anchorage airport on Wednesday as he waited for a bag after a bike trip to Hawaii. He said he did worry a bit, however, about some people not wearing masks on his last fight.

“It was a little concerning that some people that maybe seem sick and should have been wearing it, but I feel like I’m healthy enough myself,” he said.

Hansmeyer said he didn’t mask on his flight but said he’d put his on if a seatmate asked him to. Several others agreed in interviews at the airport. But not everyone.

Andy Berestoff of Kodiak said if a seatmate asked him to wear a mask, he’s not sure what he’d do.

“If the person was being a jerk about it, I probably wouldn’t. But if they’re very polite, I would probably wear one if they asked me nicely,” he said.

Standing nearby was another traveler, Rain Van Den Berg, who wore a mask. She has Type 1 diabetes, which could increase the risk of serious complications from COVID-19.

She was not excited about sitting next to unmasked passengers. She counted just seven people masking on her flight, which was mostly full.

“I hope that the filter systems help,” she said. “That’s kind of what I had to do to not think about it too much.”

Wearing a mask mitigates the risk of COVID-19 spread, and airplanes have good air filters, said state epidemiologist Dr. Joe McLaughlin. Still, he said, filters aren’t failsafe. They normally aren’t even turned on until the plane is ready to taxi.

Plus, you can inhale water droplets with COVID-19 from people sneezing, he said.

“That’s another potential risk, especially when you’re talking about people who are in closer proximity to you,” he said.

And sitting on planes is just one part of air travel. During boarding, people are often crowded together, increasing the likelihood of spreading the virus, McLaughlin said.

For people who want to try to avoid getting COVID-19 and prevent its spread, he recommended wearing a mask and getting vaccinated and boosted.

“I’m actually flying to the Lower 48 in June, and I will be wearing either an N95 or a KN95,” he said, referring to the most protective types of masks available.

Along with air travel, bus riders in Anchorage also wrestled with the sudden drop of the mask requirement. McLaughlin said the conditions for COVID to spread can be worse on a bus than on a plane because buses normally don’t have air filters.

On Thursday, several bus riders estimated mask use at around 50%, much higher than what air travelers estimated.

Outside the University of Alaska Anchorage, JC Cooks said that he’ll wear a mask even though his bus is usually mostly empty.

“I would rather wear the mask — be safe than sorry,” he said.

At the Dimond Center bus stop, passenger Dale Seiser said he understands why people want to mask. He won’t wear one though.

Now that the mandate is over, it’s his own decision to make – for now at least. The Biden administration said it will appeal the judge’s ruling. 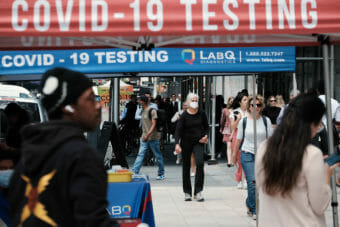 The real COVID surge is (much) bigger than it looks. But don't panic

The U.S. is seeing an average of more than 100,000 reported new cases across the country every day — and the real number is likely much higher than that, according to health officials. 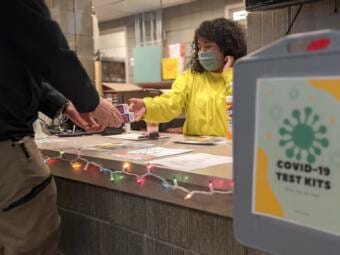 Communities with the highest reported case rates include Juneau, Ketchikan, Haines and Skagway.