When Betty Ann Bodfish died from COVID-19 complications, her family wanted to follow her wishes and bury her in Utqiaġvik, next to her mom and grandparents. Relatives gathered from Wainwright, Chugiak, Unalakleet and Colorado, hoping to have the funeral as soon as they could — but the weather was bad and volunteers were already busy digging another grave.

Still, the five men who always volunteer to dig graves in Utqiaġvik were up to the task, even on a long and stormy day.

“When my mom, Dorothy Edwardsen, asked if they could double up, dig two graves in one day, they didn’t hesitate. They never hesitate,” Bodfish’s cousin Iñuuraq Moss said about the volunteers. “They always show up, grave after grave, snow or shine. They honor our loved ones that way, and we couldn’t do what we do without them.”

When people pass away in Utqiaġvik, the family reaches out to a team of volunteer gravediggers, and they take time off from their jobs, bring their tools and get to work, asking for nothing in return. About 20 people in the community sometimes help dig graves, but about five of them come every time.

“We’re here for the people that love those who passed the most, that are hurting the most,” said one of the volunteers, Marvin Kanayurak. “I can’t imagine them having to dig a grave for a person they loved so much. So we’re here for them. We dig graves so that they don’t have to worry about it.”

In a tight-knit community like Utqiaġvik, volunteers do end up digging graves for people they know — or even people who harmed their families. A few years ago, Kanayurak helped bury a person who died in jail after murdering his aunt.

“They buried him in Barrow, and we went there and helped dig that grave,” he said. “There’s always the same five, six guys that are always there. And I mean always.”

Kanayurak has been volunteering for several decades, and he noticed that in the past few years, the number of deaths in Utqiaġvik — the biggest village on the North Slope and the northernmost community in the state — has grown.

“We used to only get two or three deaths a year, and now we’re getting way too many,” he said. “I don’t count them, I just know that the gravesite that we have, when we started it, was empty.”

This winter was a bad season for Utqiaġvik, a city of fewer than 5,000 people. Residents needed eight new graves in December and another 11 since January, said another longtime volunteer, Herman Ahsoak, who digs graves “working from the heart” for his community.

Bodfish’s death a few weeks ago was another addition to the graves volunteers needed to make.

To thank the Utqiaġvik gravediggers “for their continuous tireless hard work,” Bodfish’s family — Dorothy Edwardsen and her daughters, Tracy Benson, Qiñuģan Roddy and Moss — made five hats for the volunteers. The women got together last week to cut out the patterns and sew hats using seal and sea otter skins, a fleece lining and yarn for tassels.

“Our mom said, ‘They’re digging another grave on Monday. I’d like to give them to the guys then.’ And that was our deadline,” Moss said. “It was definitely a labor of love.”

The hats turned out to be quite warm, which was welcome news for the Utqiaġvik gravediggers who were working at temperatures of 20 below zero last month.

Kanayurak explained that gravediggers work even if it’s windy or cold because they try to make the graves the day before the burial, following the tradition of not letting anyone “sit above ground.” The team goes out to dig during blizzards, even if the gusts are blowing 45 to 50 miles an hour and the visibility is limited to 150 feet.

“The other day, we’re just facing the wind,” Kanayurak said, “and the guy standing next to me, I looked at his face and said, ‘Hey, your cheeks are turning white!’ And he looks at me and says, ‘Yours too!’ ”

At 59, Kanayurak has been on the volunteer crew the longest. When Kanayurak was a 10-year-old boy in the 1960s, he said, his mother asked him — “a strong young man” — to go help gravediggers. Back then, volunteers only used buckets, sledgehammers and a big ice pick, and it would take them up to three days to dig one grave.

“My job was to hold that pick while they hit that sledgehammer at it, and they would say, ‘Don’t lose!’ Oh, that was the scariest thing I’ve done in my life. But I got good at it,” he said.

Once gravediggers started using a drill, it cut down the digging time to about 10 hours. Nowadays, using different equipment and after years of working side by side, they can dig a grave in solid permafrost in about four or four and a half hours, Kanayurak said.

They drill eight holes close to each other, drill out the middle pieces of mud and use an excavator to dig a grave 6 to 7 feet deep. The ground has changed in the past years too: When Kanayurak first started, the permafrost was about 10 inches to a foot deep. Now the permafrost is only down to 3.5 inches, and the soil is muddier.

Kanayurak observes the passage of time with a smile: “I used to be the youngest gravedigger, and now I’m the oldest.”

Today, the youngest volunteer is 15-year-old Donald Adams, known to everyone as Button. Adams was 8 when he helped dig his first grave — the one for his auntie.

“At first, I didn’t know what I was doing,” Adams said. “At first, I was a little emotional.”

He said that as he has volunteered more and more, he’s gotten better and better at managing his emotions and understanding the importance of the help he is providing.

“We dig other people’s graves to show appreciation to the people that passed on,” Adams said. “We help them because we might have known them. They might have been part of our families, part of our life in some way.”

Ahsoak and Kanayurak both have helped bury their family members as well, but for Kanayurak, there was one grave he couldn’t bring himself to dig: his mother’s.

“I didn’t even dig when my mom passed away. I tried to, but it just made me cry so much,” he said. “I sat there all the way through, and it was the first time I did absolutely nothing on a grave.”

For Ahsoak, the hardest graves to dig are for really young people.

“When it comes to the elderly, I look at it as, we’re going to celebrate their life,” Ahsoak said. “But when there are young people, those are the harder ones to dig. … There’s been moments in the past where I’ve actually started crying while shoveling because it’s hard to witness young people passing away.”

Overall, digging graves becomes easier for the volunteers with time.

“At first it was kind of hard. Now, it hardly fazes me anymore. Death. I’m just so used to it now. But I’ve been doing it for a very long time,” Kanayurak said.

Kanayurak used to get complaints from his wife, asking him to volunteer less and focus on work more, but he would always respond that nothing was more important than honoring people who passed.

“I know we need money, but this is the last time we’re going to help them. So I’m just going to go and help them,” he said. “I just really love my community that much, and I’ll give anything to my people. I hate digging graves, but I love helping my people.”

While working on a grave, the team tries to keep the mood positive, among themselves and with the family, Kanayurak said. They share a meal with the relatives of a person who passed. They start their work with a prayer and finish it with a prayer after they cover the grave with plywood.

“The most memorable part of digging is when you taste the mud, and you smell the mud,” Ahsoak said. “The Heavenly Father says, ‘From dust you were made and to dust you shall return.’ … Every time I dig, I remind myself that one day, they’re going to have to dig a grave for me, you know. So it reminds me to stay humble.” 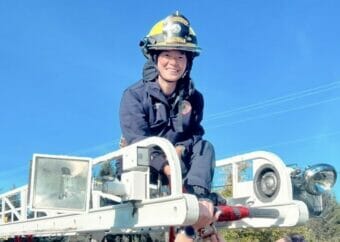 Juneau's Firefighter of the Year on the rewards of community service

Juneau's Firefighter of the Year Ella Piatt talks about how she initially became involved in this often dangerous, always meaningful work and shares some words of wisdom for future firefighters.