It’s been over a week since a tugboat ran aground north of Sitka, leading to a large diesel spill. Now that the spring herring run is in full swing, the state is advising against harvesting herring eggs in some areas where fuel has been seen.

The wrecked tugboat, the Western Mariner, has been beached since March 21 in Neva Strait. While salvage crews managed to patch the leaks and remove just over 32,000 gallons of diesel and around 11,000 gallons of mixed oil and water from the boat directly, it’s still unclear how much fuel leaked into the ocean.

In the following days, fuel sheen was observed throughout the strait and in nearby coves. On March 24, three days after the spill, the widest spread of sheen was observed during aerial surveys, as far north as Salisbury Sound and as far south as Krestof Sound.

Pacific herring began their annual spring spawn over the weekend, however, meaning it’s time for subsistence harvesters to set hemlock branches and kelp along the shoreline to be coated with eggs.

The timing of the spill could not be worse. KCAW spoke with subsistence harvester Paulette Moreno on March 25, shortly before she went out to survey the areas where she plans to set branches.

“The oil spill and the sheen that recently happened here in Sitka is much more serious and heart-wrenching than originally presented,” Moreno said. “There has been much effort made. However, with the turn of events, it is every person who loves this land’s opportunity and responsibility to respond to this crisis.”

On March 26, the Alaska Department of Health and Social Services and the Department Of Environmental Conservation issued a joint seafood safety advisory, recommending that no herring eggs be harvested from Neva Strait or St. John Baptist Bay until further notice.

Rachael Krajewski is an on-scene coordinator with the DEC, who says they’re recommending harvesters avoid those two areas because it’s where the heaviest diesel sheens have been observed.

“We issued that statement out of an abundance of caution, until we have more information to confidently say that it is safe to go ahead and harvest there,” Krajewski said. “So we’re just trying to make sure that we’re being as cautious as possible.”

The advisory also says to avoid harvesting or eating any eggs that smell or taste of oil, to avoid setting gear in areas where oil or sheens can be seen and to relocate harvest efforts outside of the area where a surface sheen has been observed.

Sarah Yoder works for DHSS, managing the Environmental Public Health program. She says the risks of eating herring eggs or seafood that has been contaminated by diesel fuel is hard to gauge because it’s hard to know how much diesel they’ve been exposed to.

“In the case of diesel oil, just like with other toxic substances, the likelihood of any health problems depends on things such as how much, how often, or for how long someone has been exposed,” Yoder said. “An occasional meal of some herring roe is less likely to increase risk potential health effects than eating it every single day for a long period of time.”

Yoder said that in general, the longer time passes after a fuel spill, and the longer an area has been without visible sheen, the safer things become. But diesel can cling to fine grain sediments, which can prolong the time it takes for fuel to dissipate.

“As time passes, and in areas flushed with clean water, the risk becomes less and less,” Yoder said. “It’s really hard to have a ‘safe or not safe’ determination without a lot of data.”

Krajewski, with the DEC, says the advisory applies to all types of harvest, including commercial harvest of herring. The Alaska DEC communicates its situation reports with the Alaska Department of Fish and Game daily.

So far, the spill has forced the commercial fishery to relocate its efforts to the eastern shore of Kruzof Island. The fishery opened twice, on Saturday and Sunday in the Hayward Strait area, where sheen hadn’t been reported.

“The partnership is working as such where we’re keeping them informed, and and then they can make an informed decision regarding whether or not to conduct a commercial fishery,” Krajewski said.

As of March 26, five days after the spill, the state Department of Environmental Conservation was reporting no visible fuel sheen outside of Neva Strait, but sheening was still present directly around the vessel and between Entrance Island to just south of Wyvill Reef, the large shoal on the eastern side of Neva Strait.

Krajewski says they’re still monitoring the area 24 hours a day and replacing sorbent boom regularly. She said their cleanup team was in the field on Monday, March 28.

She said they hope to refloat the Western Mariner in the next few days. They’ll have a large team on site monitoring the boom surrounding the vessel, prepared to respond in the event that more diesel leaks into the water.

While the situation is still in flux, Moreno said that for subsistence harvesters, this year feels different, as she braced herself to see the effects the spill has on the surrounding environment.

“What we were going out to find was a place that the herring would come to hopefully lay their eggs. What a different sort of contrast there is, in the feeling that we have of going out — there’s a an anxiety level plus, knowing that the commercial fleet is out there right now, potentially doing an opening,” Moreno said.

“It’s a lot, not only on our minds, but on our hearts,” she continued. “This is a different year. What would our Elders say?” 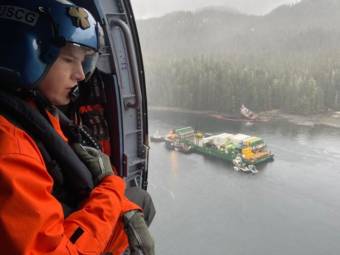 The grounding ruptured one of the tug’s fuel tanks, which can hold around 13,000 gallons of diesel fuel. The state says that a sheen was observed covering an area of around 4 nautical miles, north to Salisbury Sound. 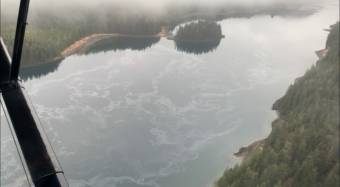 On Thursday, for the first time, the sheen was reported in Krestof Sound, an area where Pacific herring are known to spawn in the spring. 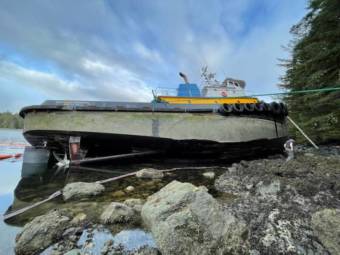 Subsistence harvesters are trying to figure out how the diesel spill could affect their harvest season, which typically happens a little later in the spring.