Officials say they now better understand how the Hooper Bay sewage lagoon broke open on Feb. 25. The breach seems to have occurred due to an extreme shift in the weather.

A Yukon-Kuskokwim Health Corporation remote maintenance worker was in Hooper Bay this past week to help the community respond to the sewage lagoon break. According to YKHC spokesperson Mary Horgan, the worker said that extreme cold temperatures in February caused a crack in the berm that surrounds and contains the lagoon.

It was a small crack, which the remote maintenance worker said is not unusual to see. What was unusual was the weather that immediately followed the extreme cold.

Just two days after temperatures dipped below -5 degrees Fahrenheit in Hooper Bay, they shot up above freezing, and it started to rain. That caused the water level in the lagoon to rise, and water started to flow through the crack, eroding the lagoon wall.

The Y-K Delta has gotten used to sudden shifts in weather this year. After the second coldest November on record, Bethel saw two weeks of rain in December. Climate change is known to cause extreme weather events, but Alaska climate specialist Rick Thoman said that it does not explain sudden shifts in temperature like the one in Hooper Bay before the sewage lagoon broke open.

“We wouldn’t want to attribute it to a changing climate,” Thoman said.

He said that while climate change explains warmer temperatures overall, there is no evidence that the range between high and low temperatures is growing in Alaska. Instead, he said that these sudden changes in temperature are better understood as random variability in the atmosphere.

The hole in Hooper Bay’s sewage lagoon remains open. As of March 4, the community was still trying to plow through heavy snow to the beach to get sand to fill the hole.

Hooper Bay’s city administrator, Sandra Tall-Lake, said that the nearby village of Scammon Bay was in the process of sending sandbags and transmission oil for heavy equipment. 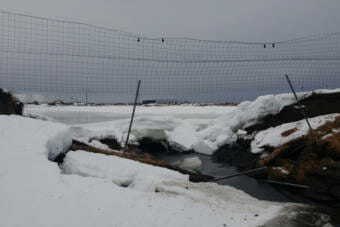 The entirety of the community’s sewage lagoon has poured onto the surrounding tundra. 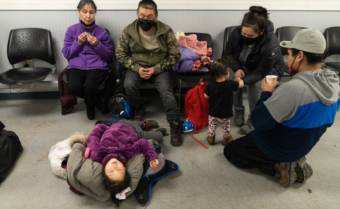 Community members across Bethel have been stepping in to help the stranded travelers by donating food and household items. 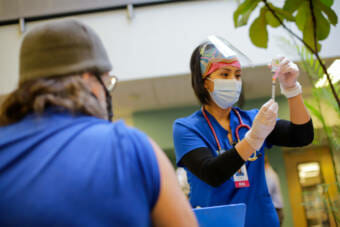 Vaccination rates vary widely across different regions and communities within Alaska, so the virus represents different risk levels in each place.