A judge has found that the Alaska Redistricting Board violated the state constitution in how it drew the Senate districts for Eagle River and East Anchorage and for the Southeast Alaska House district that includes Skagway.

Anchorage Superior Court Judge Thomas Matthews ruled that the board must revisit how it arrived at the maps. It will either have to provide a better legal justification for the maps or redraw them.

The case is being appealed, so the state Supreme Court will have to weigh in on it before the maps are resolved.

The judge did not find that the board erred in two other issues: placing Valdez with part of the Matanuska-Susitna Borough in a House district, and placing Hooper Bay and Bethel in separate House districts.

In his decision, Matthews found that the board violated the state Open Meetings Act by apparently holding discussions in private that should have been in public and failing to adequately explain why it was meeting in private.

Matthews also found that board violated the rights of East Anchorage residents to be treated equally as those of Eagle River by drawing a district that includes both the Eagle River Valley and the South Muldoon neighborhood.

“Here, the discrimination was the result of procedures that are suggestive of underlying political motives and evidence a concerted effort to push a pairing through that split the Eagle River house districts into two senate districts amidst staunch pushback from a minority of Board members and the vast majority of public comment,” Matthews wrote in the 171-page ruling.

He found that the board failed to hold meaningful public hearings on the proposed Senate districts before adopting them, and by failing to propose Senate districts when it adopted draft House maps in September.

He wrote that a quick vote to adopt Senate districts immediately after a meeting closed to the public raised concerns.

While he stopped short of finding that the board reached a consensus in private, Matthews wrote that he saw “ample evidence of secretive process at play. Further, where the Court is left with such an impression, it is undeniable that these actions have eroded the public trust in the fairness and openness of the redistricting process.”

He also found that the board failed to take a “hard look” or to make a good-faith effort to accommodate public testimony, as required by law in how it drew the districts affecting both East Anchorage and Skagway.

Matthews wrote critically of the closing argument by board lawyer Matthew Singer in the Skagway case.

“To each of Skagway’s points, the Board replied: ‘So what?’ This is not the response the people should expect to receive from the public entity in charge of redistricting and constitutionally required to hold public hearings,” Matthews wrote.

Despite Matthews’ finding open meetings violations, he did not invalidate any board actions due to the violations. However, he noted that the Michigan Supreme Court required the redistricting commission there to disclose documents from its attorney that were discussed in a closed session. And he urged the Supreme Court to weigh in on the issue.

One of the board comments that drew Matthews’ attention was made by board member Bethany Marcum. She said during one meeting that she believed it was inappropriate for a board member to criticize another member’s proposed map during a public session and that such deliberative discussions were only appropriate during private sessions.

“To the extent that Board Members felt uncomfortable undertaking deliberative discussions in accordance with the law, that should have been considered before accepting a position on the Board,” he wrote. “The Open Meetings Act is clear that ‘all meetings’ are open to the public and all deliberations likewise be conducted openly.”

Skagway is seeking to be in the same district as downtown Juneau rather than with Juneau’s Mendenhall Valley area, as it is in the board’s map. So if the board decides to make that change, it would only affect the two House districts that include Juneau, Skagway, Haines and Gustavus.

If the board decides to make changes in the East Anchorage maps, it could affect the Senate pairings for at least four House districts, and potentially eight or more House districts.

According to a schedule ordered by Matthews, the Supreme Court could hear and issue an opinion on any appeal by April 1. That would leave two months for the board to adopt new maps and for any further appeals before the June 1 deadline for candidates to file to run for office.

The board voted on Wednesday to appeal the ruling on the East Anchorage and Skagway districts, and to defend itself in any appeals on the Mat-Su/Valdez and Hooper Bay/Bethel districts. Any appeal must be filed by Thursday.

This story was updated after the board voted to appeal the ruling. 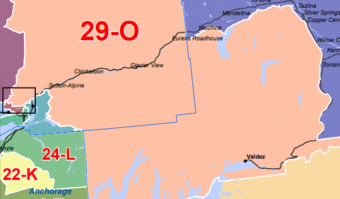 Much of Friday was taken up by whether the board treated residents of Valdez  and the Matanuska-Susitna Borough fairly when it put them in the same district.