One day last November, a group of Nikiski students found themselves standing in a circle around a nearly thousand-pound moose their teacher had just shot. Soon, the class was butchering the massive animal. The scene was part of an effort to instill knowledge in the kids about how to hunt, as well as respect for where their food comes from.

The school’s outdoor exploration class is not unique in Alaska, just as hunting for food is a normal way of life here. But to many readers of the New York Times, which recently published a story about the class’s successful hunt, it was a surprising and unfamiliar topic.

Alaska-grown New York Times reporting fellow Victoria Petersen wrote the story, which she says had been in the back of her mind ever since her days as an education reporter at the Peninsula Clarion newspaper. Petersen says she described it to her editors at the Times as, “The kids do everything except pull the trigger.”

Victoria Petersen: Students in the outdoor explorations class at Nikiski Middle High School are taught a lot of different things in their time in the class, one of which is hunter safety and hunter guidelines specifically for Alaska. And then students who choose to can opt to go on this educational moose hunt, which doesn’t happen during school hours. It was on an in-service day when we went, and then the moose had to sit for two days, and then the students came in on a Saturday to help butcher it.

Casey Grove: Oh, that’s cool. I guess some of the kids had been hunting before, but was part of that preparation for the students just about the realness of this, and the blood and all that stuff?

Victoria Petersen: I asked some of the students how they prepared and a lot of them told me that in their backyards, they would practice how to build a fire and just some of the more practical things, maybe like knife skills. But a lot of it was learned on-site, hands-on. The teacher and the volunteers showing them how to hold the blade, where to cut, where to pull. It was very interactive and hands-on. And so the students were kind of following along as they were going.

Casey Grove: There’s a lot of just really interesting first-person reporting about that and these great photos from Ash Adams along with that New York Times piece. And there was one scene in there when they pulled the heart out, and they were kind of passing it around. I wondered as you hit observed this, did you see kind of a change in those students, in terms of respecting the moose and respecting where their food had come from?

Victoria Petersen: Yeah, the kids were really, I feel like, they didn’t really know exactly how to handle themselves at first. Because a lot of them haven’t been around a dead animal, especially one as large as a moose. And so there was some timid exploration of it. When we first got to the kill, the kids were, like, petting it and looking at it, examining it.

Some of the girls specifically were really grossed out when it came to opening up the gut area where it starts to smell really bad. But their teacher was explaining everything using very technical terms. And, because there were some kids going, “Ewwww!” he was like, “It’s fine that you think it’s gross, and you can walk away and look away and all that, but um, you know, your reactions affect other people.” After he said that, the students were more quiet and just sort of observing everything after that. And that was right before he pulled the heart out.

When he pulled the heart out, I think one of the students volunteered to hold it right away to bag it up. One of them was like, “Oh, it’s still hot.” And then the other kids were really interested. And they’re like, “Oh, it’s still warm. Wow. Oh, let me feel it.” I think that was sort of a moment of like: this was a living animal. And yeah, some respect for the whole thing, the whole hunt.

Casey Grove: It makes me wonder, like, the broader question, I think maybe is, why is this important? But to that instructor, to that teacher, what did he say about why this was important to him? It seems like a little bit of an extra thing to take a bunch of kids out. So why would he do that?

Victoria Petersen: He is a hunter himself and does a lot of hunting. And he has young children. And he talked about, as a hunter, it’s pretty easy to just leave his kids at home and do it himself, because they don’t know exactly what they’re doing. You have to teach them and you have to walk through everything and maybe it’s just easier for someone who knows what they’re doing to just do it themselves. But he says that this class is a way to give the kids that knowledge and that encouragement to feel like they know what they’re doing or they can participate in this thing that can sometimes feel inaccessible. He also talked a lot about just the importance of knowing where your food comes from.

Casey Grove: What did the kids tell you about this experience?

Victoria Petersen: They all seem super excited about it. Some of the kids really liked the hunting part and the being outside by the fire and helping take apart the animal. Other kids did not like that part at all. They were just trying to get through it. And then some of the other kids really, really enjoyed cutting the meat and processing it and found cutting the tendons and the fat off of the meat was really satisfying. So there was a broad range of experiences on that trip, but I think overall, the kids said that they would do it again and felt more empowered to do it again as well. 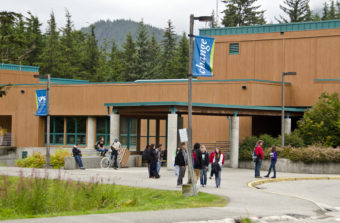 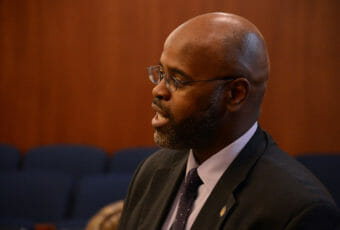 The House on Tuesday amended the bill, deleting the portion relating to the workplace. 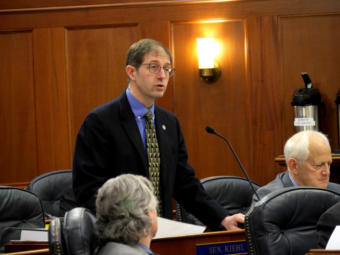