Tyonek became the first beluga calf to be successfully nursed back to health when the Alaska SeaLife Center rescued him in 2017. The baby beluga was just 6 months old when he was found stranded on a mudflat in Trading Bay, on the other side of Cook Inlet.

The scientific success story came just a few years after the SeaLife Center took in another stranded beluga calf from the beluga population in Bristol Bay. But that calf, named Naknek, died from infections.

Those two cases give biologists invaluable insight into the species, said Carrie Goertz, director of animal health at the SeaLife Center. She and her team published a paper on the two whale tales, and their findings, late last year.

“As we’re caring for animals, we wind up getting a lot of information about them, specifically, but also about the populations they come from and even the species,” Goertz said.

That’s what made Naknek and Tyonek so interesting for the team. Goertz said researchers gathered important data on the beluga populations while they were in the SeaLife Center’s care, from hearing tests to disease screenings.

Naknek, the Bristol Bay beluga, was found stranded after a storm in 2012. He was born prematurely. Goertz said he had a weak immune system as a result, which is partly why he died.

“In retrospect, there are things we could’ve tried with Naknek,” Goertz said. “We could’ve been more aggressive with various therapies.”

But she said the experience was informative. Cut to Tyonek, several years later.

“We were able to learn not only how to provide care, but potentially giving us the comfort to go ahead and pursue more aggressive treatment,” she said. “And I think that really helped in the end.”

Unlike Naknek, Tyonek had experience with his mother, as well, which Goertz said was important to how he adapted.

After a month at the center, Goertz and her team weaned Tyonek off his medications and moved him to a pool outdoors. But they determined he couldn’t live on his own in the wild.

In 2018, Tyonek was moved to SeaWorld in San Antonio, Texas.

Goertz said it was a bit of an adjustment from all the time around human caretakers. But eventually,  it clicked.

“And when he started exhibiting play behaviors with other belugas, it was just a really magical moment, to be honest,” she said.

Goertz said rehabilitating cetaceans, in general, is difficult. Even though Naknek didn’t survive, his story and Tyonek’s show promise that, while caring for beluga calves in captivity does require an extreme amount of care and dedication, it can be done. 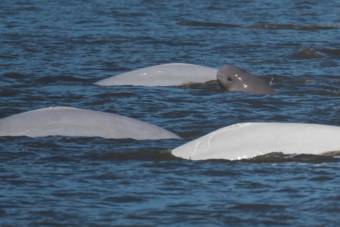 Observers count over 200 Cook Inlet belugas in rivers this spring

For the first time, volunteer observers counted how many Cook Inlet belugas passed through the rivers between March and May. 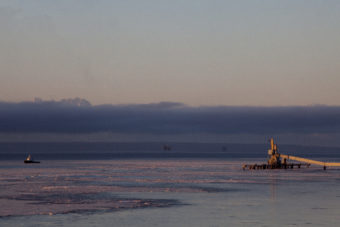 Hilcorp ordered to replace gas pipeline with history of leaks

The last time the pipe leaked, in 2017, Hilcorp didn’t complete repairs for three months, citing danger from ice in the inlet.