A lack of law enforcement in rural Alaska prompted a federal public safety disaster declaration in 2019, as well as promises from Gov. Mike Dunleavy to put Alaska State Troopers and police in specific communities off the road system.

But now, two years later, reporting by the Anchorage Daily News and ProPublica has found the state has mostly failed to follow through on those promises, and a tiny fraction of the federal dollars dedicated to addressing the problem has actually been put to use in villages.

ADN reporter Kyle Hopkins says his recent story involved a fairly straightforward comparison of the promises and the current reality in those communities.

Kyle Hopkins: Looking at the trooper staffing and kind of recent budget reports, you can see that the specific villages that were to get troopers kind of for the first time, or at least the first time in recent memory, did not receive them. And, you know, meantime, there were some really kind of dramatic things happening in some of those communities that kind of illustrated a lot of the problems that led to the emergency declaration in the first place. And so it’s, to me, it seemed like a pretty straightforward bit of reporting, which is: Okay, what was promised? What, if anything, was delivered? And also what happened to the federal money that was allocated, you know, a couple of years ago?

Kyle Hopkins: In this case, and I would say, as has been my experience with every interview request I’ve made to the governor, he didn’t. He wouldn’t talk to me. But I did talk to the newish public safety commissioner who talked about how recruitment has been very difficult for the Department of Public Safety and filling these trooper posts. I don’t know that that’s any different than it was in 2019. I mean, you know, DPS had a kind of study, or report, that came out the year before these promises that were made that said, you know, really clearly, like: Look, recruitment is a real challenge here. And so it really shouldn’t have been any surprise it’d be hard to recruit people, because it had been hard to recruit people. And in terms of the specific villages, there were positions funded in St. Michael and Ambler. Which means that in the budget, there was money for two troopers in each of those communities for two years straight. And so you could say that you funded troopers in that community, but there’s no actual trooper put there, right? So that money just kind of lapses back to DPS to spend how they wish on other personnel stuff. The commissioner said that likely housing has been — in many, many cases — was likely one of the obstacles there. He talked quite a bit about that, about how they’re trying to just find ways to lease old government offices or repurpose facilities in order to kind of have permanent housing for public safety in small communities.

Casey Grove: And, as you’ve reported in the past, part of this conversation is about where the troopers are actually stationed and this debate about whether or not they should have to focus resources on areas that have city governments and people living just outside the city boundaries, like in a couple places in the Matanuska-Susitna Borough and Fairbanks and in Kenai, and he talked about that too, right?

Kyle Hopkins: Yeah, the public safety commissioner was pretty clear on his feeling that places like the kind of the larger Mat-Su Borough, so not within city limits. But because most people live outside the city limits, they’re not served by the Wasilla and Palmer police departments, they’re served by troopers. So troopers are kind of their police force, you know, in the way that like a county sheriff’s office would exist in other places. Instead, the state pays for that policing. And so we heard this in 2019, and we heard it again, from DPS, where there are those within the department, like longtime Department of Public Safety types, who feel like there should be some payments made from these communities, or for these governments to take care of that policing. And I didn’t put it in the story, but the commissioner mentioned, like the, kind of a Mountie model, like in Canada, where if you’re say you’re the Kenai Borough, or say you’re from the Mat-Su borough, and you want troopers as your police force, you can maybe just pay for that straight up. You just contract with troopers to kind of pay for those troopers to be there. And what the commissioner said was that if something like that were to happen, it would kind of free up resources, potentially, to increase them in rural Alaska, which really was the original intent of the troopers, like back even in the territory days, it was that that was meant to be kind of a rural policing agency.

Casey Grove: So then, Kyle, tell me about the federal money that was supposed to help with rural justice. You found that not a lot of that, as a proportion, really has been spent in actual villages, right?

Kyle Hopkins: Well, in some cases, I mean, when you talk to folks, it’s hard to find someone who says, “Yeah, we saw where that money went, and here’s what it went for in our community.” I mean, certainly a lot of those grants have been allocated, or at least there have been, you know, recipients identified. We can know where they’re going to go, but not in some cases. I mean, with the money that went to the Denali Commission, there have not been that many applications for that funding. And I think that’s kind of a whole other can of worms that really bears additional reporting or even another story, is this idea that it’s one thing for the money to be promised and for it to go into grant programs, but then how does it get to the communities that need it the most, right? And if there’s obstacles there, potentially it’s because you might have small communities that don’t have someone writing grants, you know, or who are kind of plugged into that opportunity, right? And so there seem to be some obstacles in terms of the communities that need the funding the most actually getting the funding. 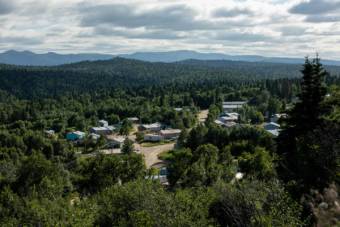 It took Alaska State Troopers 110 days to catch one of three people accused of an ambush in Russian Mission on July 28. Neighbors said they slept with rifles under their beds and shotgun shells on the windowsill, ready for anything.

Tribal president Joel Jackson says the all-clear has been issued and people are venturing outdoors again. 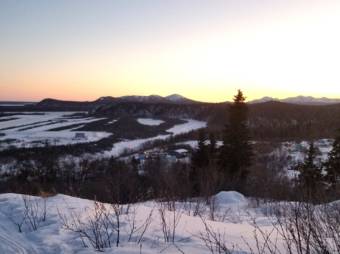