Kiehl says the Alaska Marine Highway system and gaps in winter ferry service were top of mind for Haines residents during his recent visit.

Kiehl echoed the community’s frustration with the lack of travel options and called it a predictable crisis given the last three years’ failures in reliable service. He said he supports activating the $60 million Alaska class ferry tied up in Juneau as a backup.

“The Tazlina is sitting tight up to the dock. There are in fact enough folks to run it, if they just call the Inlandboatmen’s Union, and the Masters, Mates and Pilots and ask them,” Kiehl said. “But instead they’re telling me well, we just don’t have the crew. That’s unacceptable.”

On a brighter note, Kiehl says the ferry system’s long term outlook is positive as there will be federal funding through the $1 trillion infrastructure bill passed by Congress.

“The good news is we have opportunities for next year, thanks to the infrastructure bill, to get more of our ferries in working order and to increase our wintertime service. So that we have the chance to actually have more vessels running, and there’s a possibility of a backup. And beyond a backup, just have something closer to adequate service for communities to connect to one another in the wintertime,” he said.

Kiehl said he expects the next legislative session, which begins Jan. 18, will focus on how Alaska will spend its windfall of infrastructure funding.

“We’ll be working on how to dole out the money for broadband, transportation infrastructure and several other categories,” he said. “We’re all scrambling to read that bill and understand it as fast as we can.”

Upper Lynn Canal communities will have a new state representative as a result of the Alaska redistricting process, according to 2020 Census data, but Kiehl’s senate district remains unchanged.

At the town hall on Wednesday, Haines residents also asked about state education spending, as Klukwan fights possible school closure due to low enrollment and the Haines district grapples with budgeting year-to-year among the state’s financial uncertainty.

Kiehl said he’s consistently fought budget cuts, and this year opposed the governor’s proposal to continue to cut $50-200 million in spending each year.

“Over the last six years, we have cut the operating budget. And I’m just trying to be, you know, fair here and talk about our recurrent annual expenses, the operating budget. From about five and a half billion to about four and a half billion,” he said. “And I’m here to tell you, you see it in the marine highway system, you see it in our schools. We can go on through the list of services the state provides. We’re having a hard time serving Alaskans needs at this point. I don’t think there’s a lot left to cut.”

The governor’s budget is due out on Dec. 15.

Kiehl says Dunleavy’s oil price projections are too high and thus unrealistic for predicting incoming revenue. He wants to see the state develop new sources of income, including an income tax.

“One of the problems we have is that economic growth doesn’t pay any of the state’s bills, and people in my line of work have a tendency not to pay attention to it because it doesn’t pay the state’s bills,” he said. “I got to tell you, most states you will see the legislature pay all kinds of attention, have hearings on job growth on small business formation and creation, small business growth, household creation. Demographics, right, how many working age people do we have, are we gaining, are we losing. I’ve never seen the Alaska State Legislature do that. That’s upside down and backwards.”

Kiehl was elected in 2018. He’s filed an intent to run for re-election in 2022 for a two-year term. So far, no challengers have emerged for the senate district, which encompasses much of the upper panhandle.

The town is experiencing one of its largest outbreaks of the pandemic, with upwards of 30 residents testing positive since the first week of April. 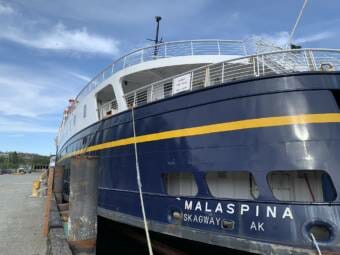 Malaspina ferry could get second life as Alaska attraction

The state said Tuesday that four parties have expressed interest in the Malaspina, a mainline ferry that’s been a mainstay of the fleet since the 1960s.

A dispute over whether U.S. border guards would be allowed to carry sidearms on Canadian soil led authorities to pause sailings in 2019. Then the pandemic hit.