Aaron Gordon spent the last five years designing and fine-tuning his very own dice game. Unbeknownst to his friends and family, they were part of that experiment.

“Every once in a while, or at family gatherings or whatever, I would just kind of nonchalantly set this on the table with the other games, and people would pick it up and read those rules on the back and they’d go through it,” he said. “And I’d just kind of sit in the corner taking notes. And they’d read it and not understand a rule, and I’d be like, ‘That needs more clarification.”

Gordon works at Kalifornsky Beach Elementary School and is a producer with Final Spark, a Kenai Peninsula film production company.

He also really likes games. Several years ago, he was finishing up a math lesson with a student when they had a couple minutes to kill.

They picked up a pair of dice. Whoever rolled a higher number won the round.

“So we did that for a couple minutes and I was getting pretty bored of it,” Gordon said. “So, this kid liked fantasy-type stuff. And so I went with, ‘Oh, let’s pretend: Instead of rolling a six, a six is a fireball.'”

That got the gears turning in Gordon’s head. He found a wooden cube and drew pictures on the sides to correspond with different fantasy symbols and characters. And he came up with a prototype.

“So after I had this for a little while I decided to kind of look up what it would take to do it for real,” he said.

He finalized his design and ordered 37,000 dice from a manufacturing company in China. They come in compact boxes, with a beautiful illustration on the front. It’s a rendering of the world the game’s characters inhabit.

Battle Dice involves a lot of rolling the dice. But it’s not just about luck. Gordon said it’s been fun to watch his friends figure out strategies as they play.

And it doesn’t take long to learn.

“It’s a game that we play while we’re waiting for everyone to show up for a real game,” he said. “If we’re going to play like a big board game that takes a setup and everything and we have half a dozen people coming, the first person that gets here will do a little duel and will battle each other. And if somebody else shows up we can add ’em in and play again. It goes pretty quick.”

In a nod to the game’s origins, Gordon gave a copy to one of the classes at his school. He said they’re play-testing it now.

Battle Dice has been on the market for two weeks. Gordon said Beemun’s Variety has sold out twice already.

You can also find Battle Dice — and a video on how to play— at finalspark.org 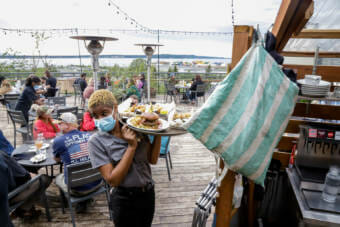 As job numbers have rebounded, more attention is being paid to “labor churn” — not just job openings, but also things like how many workers are in those jobs and how many are quitting or retiring.