Fourteen-year-old Joseph Tagaban returned home Saturday after nearly a year of cancer treatment in Seattle. Many community members met him at the airport.

Dozens of people watched through a chain-link fence as Joseph and his family got off the jet. Wet snow was coming down but no one seemed to care.

It was just after Christmas last year when Joseph first learned he had a rare form of cancer known as acute myeloid leukemia, or AML. It started with swollen gums and ended with four rounds of chemo over several months.

In February, he spoke with KFSK over the phone. He said the treatment was more difficult than he imagined.

“Especially the pain,” Joseph had said. “Like extreme pain; it skyrockets sometimes and I just feel that it gets unbearable sometimes.”

On Saturday, he was out of the hospital gown and into a black puffy coat, khaki pants and a red stocking hat. As he approached the crowd, people chanted, “Joseph Strong! Joseph Strong!”.

“Joseph Strong” is a slogan that’s been all over Petersburg for months, on T-shirts and posters throughout town.

People approached him for hugs.

“Welcome home, buddy,” a friend said while patting his back.

Even though they were outside, everyone was masked. A long embrace came from classmate Iris Case. She later said that they kept in touch while he was away.

“The first couple of months a lot of people were in contact with him and then he went through a really rough patch and we just FaceTimed a lot and he kind of helped me with school work,” she said.

On most days, if Joseph wasn’t too tired, he could attend school remotely from the hospital. Some teachers were in the crowd. He got straight As the first quarter of this year.

Watching it all from a distance was his mom, Je Tagaban. She was overjoyed with the homecoming.

Tagaban’s immune system is still weak. The community has the worst outbreak of COVID its seen since the pandemic started. As of Saturday, it’s the highest case count per capita in the country.

Je says her son asked her about being around the crowd.

It might be a few weeks before Tagaban can safely return to school in person. But he said the community support now, as it did before, keeps him looking to the future.

“One of the most important things that I had to keep in mind was to stay positive and stay confident that I was going to beat cancer,” he said. “So, I just kept that in the back of my mind and even though, I mean, I had my moments, I just couldn’t deal with having all this pain but I knew that there was light at the end of the tunnel.”

The welcome didn’t end there. People got into their cars and Tagaban climbed into a fire truck for a noise parade through town. 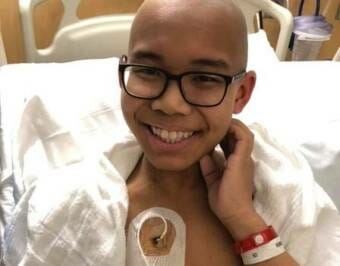 The Southeast community has come together for a single cause: raising tens of thousands of dollars for a 13-year-old boy fighting cancer a thousand miles away, in a cancer ward in Seattle.