Lena Foss thought she got lucky when she salvaged a dryer from the dump in Akiak, a Yup’ik village in Western Alaska.

She knew it was broken, but figured she could fix it by looking at tutorials online.

“First thing I did was YouTube how to replace a belt,” Foss said. “But the internet was so slow and I thought it was wasting gigabytes so I turned that off before I completely finished how to fix the dryer.”

Akiak sits along the Kuskokwim River, which transforms into a frozen highway in the winter. The only other way to get there is on a four-seater plane.

The village’s remote location has made high-speed internet, which is typically delivered through cables, a fantasy for its 460-some residents. Now, it’s about to become a reality in Akiak and rural communities around the nation, thanks in part to the pandemic.

For Shawna Williams, getting broadband will mean being able to see her teachers and classmates. During the pandemic, Williams decided to get her college degree, while holding down her full-time job as a childcare worker, and raising five kids. She has the fastest internet plan available in Akiak, but she says it can’t handle video all the time, which means she attends her remote classes by phone.

“The internet is so unreliable, and it’s usually too slow, especially in the evenings when I get off of work, to load even a PowerPoint,” Williams said.

She says she pays $314 a month for internet service now. But once Akiak gets high-speed broadband later this month, Williams’ bill will become a quarter of what it is now, according to the tribal government, and her internet speeds and data limits will more than double.

Similar advances in broadband access are happening across the nation, largely because of COVID, says Blair Levin, a broadband expert and nonresident fellow at the Brookings Institution, says the main reason is COVID.

“It really focused the mind of everyone, Democrats, Republicans, governors, senators, on the importance of getting broadband everywhere and making sure that everybody can afford to get on,” Levin said.

Since the pandemic hit, the federal government made billions of dollars available to expand broadband. It dedicated a large portion of the money to rural tribal lands, which are some of the least connected areas in the country. Akiak used the coronavirus relief funding to pay for its broadband project.

But money was only one piece of the puzzle for the village. The tribe is also relying on satellite technology that just became available in Alaska this year. Low-Earth orbit satellites, operated by a company called OneWeb, can deliver high-speed internet to rural areas that cables can’t reach.

Shawna’s father and Akiak Chief Mike Williams Sr. said that the tribe was motivated to act quickly on these opportunities after seeing the pandemic’s effect on learning in the village.

“The kids have lost between year and year-and-a-half of their education because of no technology, no internet at the home, and no remote learning,” Williams Sr. said. “We may be forced to do a lockdown again, but we’re going to be prepared this time.”

Akiak will be the first community in the YK Delta to bring broadband internet to all its residents, but it won’t be the last. At least 16 tribes in the region are following Akiak’s blueprint to install broadband in their villages.

As technicians install broadband receivers in Foss’ living room she watches eagerly, standing next to her broken dryer.

“When I have internet, everything I need for this dryer will be ordered,” Foss said.

She said that she could learn to repair her neighbors’ broken appliances too.

That’s just the beginning of her online goals. Foss wants to be able to google the laws around her Native allotment lands, research grants for her village, and file her taxes online.

“Internet will open my eyes, I think. I know it will,” Foss said.

For decades, the YK Delta has been left behind in the digital revolution. People here are excited to catch up. 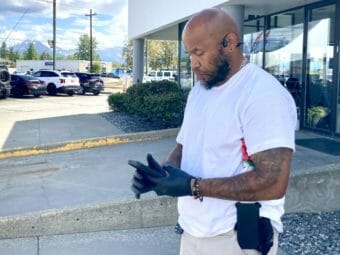