A woman in Watertown, N.Y. has been charged with helping to steal a laptop from the office of House Speaker Nancy Pelosi during the Jan. 6 siege of the U.S. Capitol, and now one Alaska woman is breathing a little easier.

“I feel like a cloud lifted off of us,” said Marilyn Hueper, “but I don’t necessarily wish that cloud on other people.”

The FBI raided Hueper’s home April 28. In a document supporting the search warrant, the authorities accused Hueper of being the woman in photo No. 225 — a dark haired woman in a black puffy coat photographed repeatedly inside the Capitol. The FBI said footage showed the woman helping to steal the laptop in Pelosi’s office.

Hueper has always maintained it was a case of mistaken identity. She acknowledges she and the woman in the photo were wearing similar coats and have similar hair, but she notes that their earlobes are different, and she said she doesn’t own a sweater remotely like the one the woman in the photograph was wearing.

“You’d have to pay me to wear that sweater. It’s so ugly,” she said.

She and her husband, Paul Hueper, were in Washington Jan. 6. They heard then-President Trump speak at a “stop-the-steal” rally that preceded the Capitol siege. They say they went no further than the Capitol lawn.

The lawn, like the Capitol, was closed to the public. But Hueper said it wasn’t entirely clear which areas were off-limits, since some public buildings were letting protestors in to use the bathroom. Still, she said, when they were on the lawn she told her husband they weren’t going into the Capitol.

“There were lots of rumors that, you know, there had been violence inside,” she said in a phone interview from Homer. “And we saw some people bloody. And so I thought, ‘That doesn’t seem like, you know, using-the-bathroom kind of open. I think we should not be doing that.’”

The world saw internet videos of pitched battles between the protestors and the police. Hueper said they didn’t witness that, and they didn’t see the videos until later. Their phones couldn’t connect to the Internet. The cell system was overburdened. By the time they arrived on the Capitol grounds late that afternoon, she said she didn’t see anyone fighting the police or any police giving orders.

“There’s people selling peanut butter and jelly sandwiches and picnicking,” she recalled, “and people with their own sound systems who are, like, sharing whatever their shtick is and selling whatever they want to sell — it was like a carnival outside. But there was no official presence, sharing anything or giving any direction. So it was very odd.”

The Huepers caught a flight out that evening and didn’t know they were accused of anything until the FBI came through their door months later. Hueper said she feels like she’s off the hook but would like to hear it from the FBI or the Department of Justice.

“I thought that it was only appropriate that they should apologize and make restitution, like the rest of us grown-ups. But so far, we haven’t heard from them,” she said.

A spokesman for the U.S. Attorney’s office in the District of Columbia said he couldn’t comment on any case or charging decision.

As for the New York woman authorities now say is the woman in the black puffy coat, 55-year-old Maryann Mooney-Rondon and her 23-year-old son are charged with obstruction of an official proceeding as well as theft of government property and other misdemeanors. Both mother and son allegedly admitted to FBI agents that they entered Pelosi’s office suite during the siege of the Capitol. 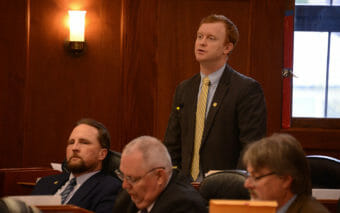 Alaska Rep. Eastman remains on ballot but could be disqualified after election

The Alaska Constitution’s ‘disloyalty clause’ will be tested in a Dec. 12 trial. 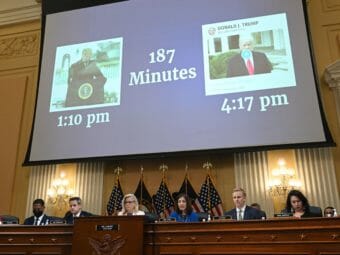 A major theme from the hearing was how much television the former president consumed as the chaos and violence unfolded. 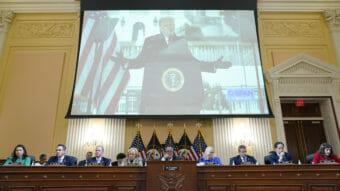 The Jan. 6 committee holds its 8th hearing Thursday night. Here's what to expect

The Jan. 6 committee is holding a prime-time hearing on Thursday — the last of its planned summertime hearings.