If Alaska state leaders can’t resolve an impasse over the budget, large swaths of state government will shut down in July. That could include Alaska’s lucrative summer salmon fisheries, which is causing concern across coastal communities.

Southeast Alaska’s summer salmon troll fishery opens July 1. That’s the same day nearly 15,000 state workers could be out of work. Among those is Grant Hagerman, a state fisheries biologist managing the fishery from Sitka.

“We’re planning not to be here on July 1 unless we hear differently,” Hagerman said. “And with that, that summer fishery does not commence.”

Many of Alaska’s fisheries are operated by emergency order. That means fisheries open and close based on real-time data and the professional judgment of biologists like Hagerman. But he’s not part of the special class of state employees that would keep their jobs even in the shutdown — public safety and public health workers.

“You would think that we would have had a message, maybe from administration, just saying ‘Here are the exempt or partially exempt or whatever job classes that could remain open,’ but we didn’t get anything like that. I think it’s just pink slips across the board if they don’t pass so just — it’s really scary, you know, not just for us losing our jobs, but I mean, we manage a fishery with 1,000 permit holders and Southeast, so it affects a lot of people.” Hagerman said. “But I have faith that they’ll get something agreed to.”

Even at the top of the ladder, agency leaders say they don’t have many answers. Rick Green, a special assistant to the commissioner of the Alaska Department of Fish and Game, says this is the closest his agency has come to actually shutting down.

“We as a state are on uncharted ground, because I think last time — the closest it ever got resolved was nine days before, or eight days before,” Green said “So we’re closer than we’ve ever been before.”

Green says the department is operating with the hope that the budget discussion will be resolved before that deadline.

“It’s a big question, but it’s one that we’re not addressing, and we’re hoping with best intent that this comes to a resolve and we don’t have to change anything,” he said.

This lack of clarity is stressful for everyone in the industry, says Amy Daugherty, executive director of the Alaska Trollers Association.

“Here’s the bottom line — many of our guys [commercial trollers] head out of town in preparation for the July 1 opening a few days in advance, obviously. And we’re coming right up on that within the next few days,” Daugherty said. “So, you know, this is incredible that we’re going to be so directly impacted by these huge decisions, which, you know, are way over our head.”

Ketchikan Rep. Dan Ortiz — an independent — says he and most of his legislative peers understand the gravity of the situation.

“Any kind of commercial fishing where it requires management — on-site management of the department — is in jeopardy,” Ortiz said Wednesday morning.

The main sticking point he says was a procedural vote in which four Republican House members refused to set the effective date of the budget to July 1. It’s part of a larger battle over the size of Permanent Fund dividend checks for Alaskans.

“And so therefore, we are where we are,” Ortiz said. “We all are aware that if we can get that thing done, or if we can convince the governor that he doesn’t have to have it done in order for him to enact the budget, either those two things would prevent a government shutdown.”

The economic impact of shutting down Alaska’s lucrative commercial salmon season would be huge, especially in places like Bristol Bay which peaks in July.

Dan Lesh, a Juneau-based fisheries consultant with McKinley Research, looked at the value of salmon landed over the past five years. He says that on average about $316 million worth of salmon is typically taken in the month of July alone.

“Over 50-52% — over the last five years of the value of our overall salmon harvest for the year was in the month of July, and that’s value to the fishermen,” Lesh said.

And even if state workers go back to work just a week or so late, the damage could be done. That’s because most salmon species are heading towards rivers and streams. It’s not possible for the fishing fleet to get a second chance for intercepting a lot of them.

“The only species that harvest could maybe be made up for would be king salmon,” Lesh said. “You could have some of those — good portion of those harvests are not necessarily heading to their home river, but the other fisheries are all timed to runs that are as a fish are entering spawning habitat. So they’re not available for harvest later on in the summer.”

The potential $316 million loss in payments to fishermen doesn’t include the possible impacts to seafood processors and other shoreside support for Alaska’s commercial fleet.

This story includes reporting from Izzy Ross at KDLG in Dillingham, and Jacob Resneck with CoastAlaska in Juneau. 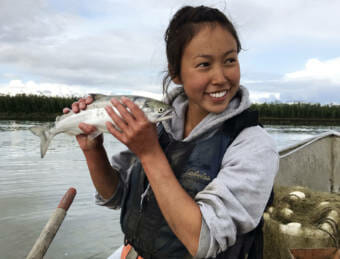