In March, Alaska became the first state in the country to open up vaccinations to all residents 16 or older, without other restrictions on eligibility. Health officials say that in the months since then, however, a saturation of available vaccine hasn’t translated into a corresponding number of vaccine recipients.

The state even opted to donate about 3,000 doses of its allocated vaccine recently to a federal pool based on an assessment that the vaccine wouldn’t get used, Bobo said.

In contrast, some cities and states in the Lower 48 are chugging toward widespread vaccine coverage. The national average of those 12 and older with at least one shot is 61.5% while Alaska’s average is 54%. By Thursday, Alaska had fallen to No. 28 among states for per capita vaccinations, according to data from the Centers for Disease Control and Prevention. 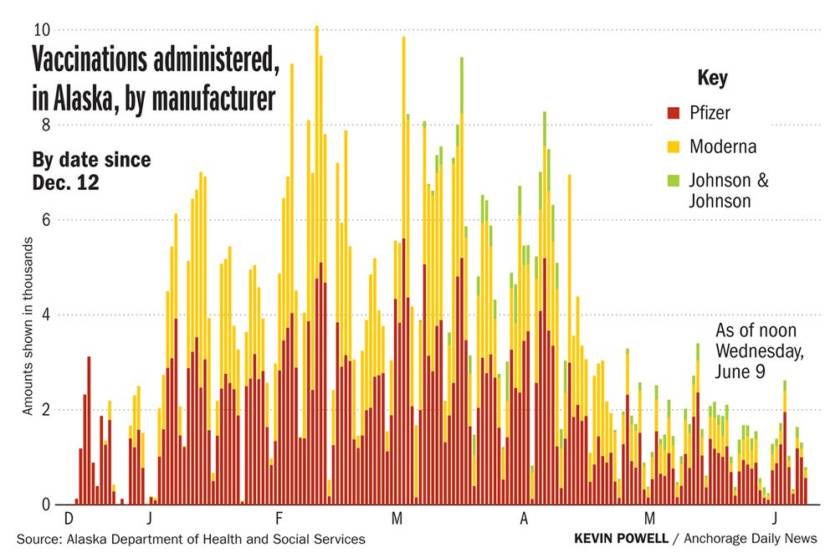 This week, Seattle Mayor Jenny Durkan announced that with 78% of those 12 and older having received at least one vaccine dose, “Seattle is America’s most vaccinated major city,” the Seattle Times reported.

San Francisco was neck-and-neck with Seattle: The city’s vaccine tracker showed that about 79% of its eligible residents had received at least one vaccine dose by Wednesday — at or close to a “herd immunity” benchmark that epidemiologists say can occur once 70% to 80% of a population is immune to a virus.

Meanwhile, just over half of eligible Alaskans had received at least one dose of COVID-19 vaccine as of Thursday morning while a higher percentage of its more vulnerable 65-and-older population — about three-quarters — was at least partially vaccinated.

“We’ve got a lot of work to do to kind of catch up with the rest of the nation,” he said.

Although Alaska’s coronavirus case counts have been falling since early spring, slumping vaccination rates through the summer could mean an uptick in cases come fall. There will be more COVID-19 activity in the colder months, McLaughlin suspects, but the number of people vaccinated in the state will likely help determine how much virus spread may occur.

Six months into the vaccine rollout, vaccination rates have varied widely across Alaska. Some of the least vaccinated regions happen to be some of the state’s most populated and connected areas, where vaccines are available at restaurants, fairs and just about every major grocery store chain. Meanwhile, some of the state’s more remote and hard-to-reach regions are recording some of the highest rates of vaccination.

For example, 84% of eligible residents in the Aleutians East Borough — which leads regions statewide — have received at least one dose of vaccine. Regions including Skagway, Bristol Bay and the Nome Census Area are also seeing some of the highest vaccination rates. 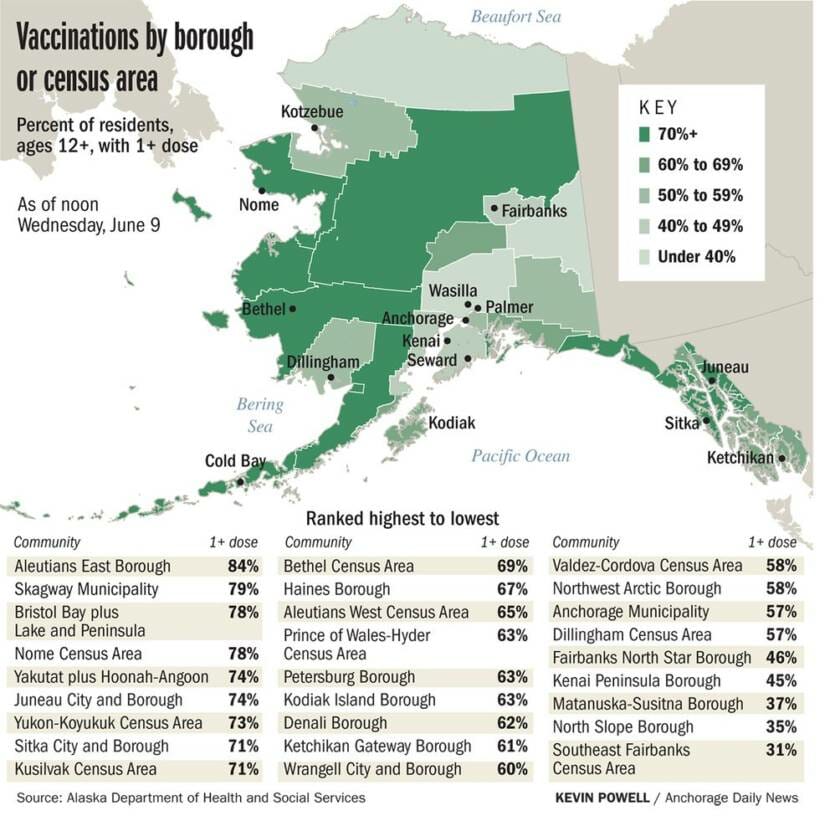 On the opposite end of the spectrum, the Southeast Fairbanks Census Area has a 31% vaccination rate, followed by the North Slope with 35% and the Mat-Su Borough with 37%. The Municipality of Anchorage, Fairbanks North Star Borough and the Kenai Peninsula Borough are all in the bottom third as well.

Much of the success in many rural communities in Alaska can be attributed to strong tribal health presence in those places, where primary care providers and public health nurses have strong relationships with their patients and the communities they serve.

In communities with lower vaccination coverage, the slowdown can’t entirely be traced to vaccine hesitancy, McLaughlin said. Rather, he said, many young, healthy people are busy and likely have not gotten around to taking the time to get a shot.

Six months ago, state leaders expected to have significantly fewer doses of the shots, said Dr. Anne Zink, Alaska’s chief medical officer, and being able to vaccinate people as young as 12 is another unexpected development that has boosted the vaccine effort. Goals have changed, and health officials are putting their efforts into driving up demand for the shots.

State officials said this week that they hoped that over time, more Alaskans would opt to get vaccinated, and they emphasized how well the vaccines appeared to be working: Since Jan. 1, 98% of COVID hospitalizations have been among people who were unvaccinated.

“The vast majority of people who have gotten vaccinated are not getting sick,” added Louisa Castrodale, an epidemiologist with the state health department. “I think that speaks to the effectiveness of the vaccines.”