Alaska’s capital city has mostly reopened, with restaurants and businesses bustling with tourists. The state Capitol? Not so much.

State legislative leaders revoked their mask-wearing requirement for the Capitol last month. But so far, they’ve maintained a strict ban against members of the public entering the building — and they’re showing little urgency to change that any time soon.

The ban is keeping out summer tourists, forcing lobbyists to do business by Zoom and stopping Alaskans from testifying to key committee meetings and witnessing floor sessions in-person.

Lawmakers kept the Capitol closed to all but legislators, employees and a handful of reporters for the duration of their regular session, which ended last month, and into the current special session, which began May 20.

The COVID-19 mandates were originally intended to protect lawmakers and staff who were needed to pass a budget critical to keeping state government operating. But that has taken months longer than expected, said Juneau Democratic Rep. Sara Hanna, who chairs the joint House-Senate committee, which manages the Legislature’s internal affairs.

“There were points in time where we thought we’d have a budget in April and May,” she said in an interview this week. “And now we are on June 1, and we still haven’t crossed that threshold.”

The Legislative Council is set to hold a meeting later this month and will likely discuss the future of the Capitol’s mandates, Hannan said. But it’s not clear how quickly such rules could be revoked and what precautions might remain in place, as Hannan said she could not speak for the 13 other members of the committee.

“I can’t promise it. But I anticipate that that is on the list of agenda items to take up: the COVID policies that remain in place, including the building access,” Hannan said. “There’s a lot of dialogue about opening the building.”

In a series of interviews at the Capitol this week, state lawmakers had different degrees of enthusiasm about opening the building up to members of the public. Some noted that it’s a relatively quiet time, with just a couple of committee meetings a week.

But none were outright opposed.

“I miss having the tourists, interacting with them in the hallways. It helps make the time go a little faster as we’re in hurry-up-and-wait moments,” said Wasilla Republican Sen. David Wilson. “It should be open.”

Anchorage Democratic Rep. Geran Tarr said she also supported opening the Capitol, as long as members of the public are screened like employees.

“They were able to effectively screen hundreds of people every day that needed to come in for work,” she said. “And I’ve never seen that many visitors come in on a summer day, so I think we could manage it.”

Lawmakers have so far spent $2.1 million in federal relief money on a contract with a workplace health and safety firm, Beacon, for COVID-19-related screening and testing, legislative officials said.

Roughly 85% of people working in the Capitol are now vaccinated, officials said. While Beacon is still screening legislators and employees for coronavirus symptoms, its contract ends June 30.

That means that without a change, the firm wouldn’t be available to screen either lawmakers or members of the public who want to attend the next special session, which GOP Gov. Mike Dunleavy has called for August.

Given legislators’ interest in reopening and the available screening, why hasn’t the Legislature already increased access? The answer appears to be institutional inertia, according to Hannan.

Businesses and individuals can make their own decisions after considering the risks and benefits of reopening, she said. But government works differently, she added.

“Democracy is a collective process, where we each don’t get to do what we want,” she said. 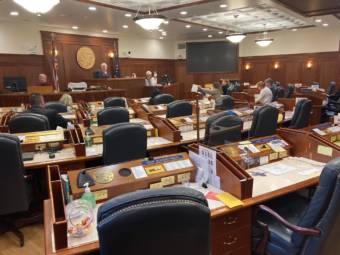 Nearly 15,000 Alaska state workers received layoff notices on Thursday. The next special session is scheduled to begin at 10 a.m. on Wednesday in the Capitol. 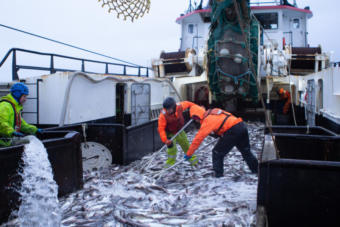 Pollock’s apparent triumph had Alaskans questioning the integrity of the election.