That’s right: The island has volunteers who, under a U.S. Fish and Wildlife Service permit, help rescue injured eagles or salvage dead ones.

Normally, local fisheries biologist Brianna McGrath heads a group of four volunteers to do the job. But nearly all of them are leaving the island for the summer — a busy time for pulling eagles out of warehouses or rescuing injured ones from Unalaska’s docks and local spit.

That’s where Megan Dean comes in.

Dean works at the Museum of the Aleutians and is a self-proclaimed “bird nerd” like McGrath. She grew up in Connecticut, fascinated by red-tailed hawks and other raptors. She also lived in Bethel, where she worked with a falconer who had a gyrfalcon and a goshawk.

Dean was “nervously excited” to be asked to become a volunteer eagle rescuer.

“They’re distantly related to the dinosaurs of Jurassic Park that caused that whole ruckus,” she said. “So I was like, ‘This is probably one of the craziest things I’ve ever signed up for in my life.’ But here we are. And we survived.”

Over the past three years, McGrath said her team of volunteers has rescued or retrieved more than 50 eagles. But, she said, that doesn’t include five to 10 additional releases of uninjured eagles that get themselves caught up trying to get fish from a warehouse or crab tank.

“There was an eagle — it looked like a female. She was very large,” Dean said. “She was over at UniSea and had a couple of different injuries. Brie called me and we went over to scoop her up.”

Dean and McGrath put on heavy jackets and thick leather gloves, approached the female eagle and threw a blanket over her. Dean said she grabbed the large bird and cradled it in her arms, making sure to hold on tight to the raptor’s strong legs.

“That’s so they can’t talon your face or the artery in your arm,” she said. “And it helps keep them immobile, so you’re safe and they’re safe.”

They put the injured eagle into an extra-large dog crate and took it to the airport, where it would fly out on an ACE Cargo flight to the Bird Treatment and Learning Center in Anchorage. The center takes about 1,000 injured birds every year from around the state, according to its website. McGrath said if the eagle can be rehabilitated there, it will be.

“At the eagle repository, Native Americans across the country can apply for their parts and their feathers,” she said. “And they’ll use them for ceremonial purposes, religious purposes. It’s just a cool, cool system.” 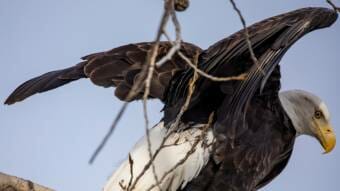