The Admiralty Island village of Angoon has received nearly $2 million in federal funding to build a visitor center. The relief money is meant to combat economic impacts brought on by the COVID-19 pandemic. Local leaders hope it will boost a homegrown cultural tourism industry.

Angoon doesn’t get big cruise ships, even in non-pandemic times. But they still normally see a small but steady stream of tourists in the summer. There are a handful of fishing lodges and a couple of small boats bringing visitors to the island community of around 500.

There aren’t a lot of services for the visitors who do come, which is one of the reasons local leaders applied for funding to build a visitor center.

“A place for people to go, a place for people to be able to get coffee or a small snack while they’re in town. And having restrooms available,” Kootznoowoo, Inc. board chair Melissa Kookesh said. Kootznoowoo is Angoon’s local Native corporation. “Because that’s one of the things that we don’t have in the community is a place, basically, that can house all of those things.”

She said Kootznoowoo, the city, and Angoon’s tribal government, the Angoon Community Association, have been working together for the past couple of years to figure out what a community-led eco and cultural tourism industry could look like locally. They found out at the end of April that they’d received a competitive $1.78 million grant from the Economic Development Association. They’ll use the money to build a 2000-square-foot visitor and retail center on city-owned land, which Kookesh said could also serve as a cultural hub for the community.

“I’m excited about the opportunity to have dance groups in a visitor center performing, but also learning, being able to learn their songs, learn the history of the songs, being able to sell items that they’ve made, that they’ve worked really hard on, you know with beading, weaving, carving, what have you,” Kookesh said. “It’s a great opportunity, and I’m just excited about it for us and happy that it’s our turn for having something like this put in our community.”

So far, Angoon is one of nine Alaska grantees to receive a piece of the $1.5 billion allocated to the Economic Development Association from the CARES Act to help communities hard hit by the coronavirus pandemic. Other grantees include the Alaska Travel Industry Association and a workforce development program in Fairbanks.

Deputy Assistant Secretary of Commerce for Economic Development Craig Buerstatte said the need in Angoon is great: The 24-month unemployment rate is more than double the national average.

“So many communities have been hit hard particularly in travel and tourism, but Angoon especially,” he said.

But it’s not just local need that made their application stand out. Buerstatte said they also demonstrated strong community support and a lot of potential.

“It has a great natural asset in its geography — the land, the water — and has been attracting tourists for some time. And we just want to build on that capacity with a new visitor center to hopefully, not just continue to bring tourists, but bring more of them and more frequently,” he said.

Kookesh said this is just one piece of a broader effort to grow local tourism. The community has also received funding to expand a trail and create an app-based cultural and historical walking tour, for example. She said it’s not only an opportunity to bring economic development to Angoon. It’s a chance to share the natural beauty and local culture with the world.

The project planning is still in the preliminary stages, and she said they’ll look to youth, elders and all community members for ideas as it progresses. Kookesh said they’re looking forward to welcoming more visitors to Angoon once it’s safe to open up.

Assembly members asked City Manager Rorie Watt to go back to Norwegian, suggesting the company donate directly to an organization like the Juneau Community Foundation, instead of the city itself. 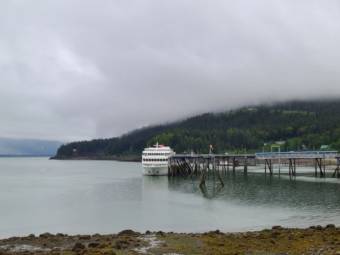 The 80 passengers aboard the relatively small American Constellation spent Friday in Skagway, then Saturday touring Haines. 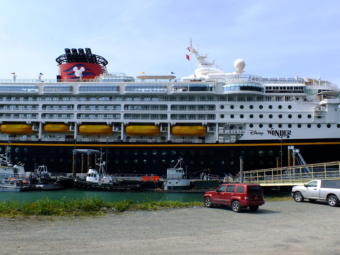