The Haines Borough Assembly voted unanimously to reopen Beach Road at a meeting last night. Access has been restricted since a deadly landslide swept across it in December. Now a group of Beach Road residents, borough officials and local construction experts will begin planning how to restore road access.

The assembly’s decision to reopen Beach Road came after geotechnical engineers presented a report about the landslide and potential ongoing hazards associated with it.

George Machan, an engineer with the geotechnical firm Landslide Technologies, helped write the report. One hazard that has caused concern is a crack that formed in the hillside above Beach Road extending out from the crown of the landslide. Geologists with the Alaska Division of Geological Geophysical Surveys worried the crack could cause more material to break loose and damage structures outside of the existing landslide path.

Machan said based on the information he and his team reviewed, it’s unlikely to be a high risk.

“We’re considering that low to moderate risk,” Machan said. “I know early on in December the state DGGS had wondered whether that could be a larger mass, and you know, while that’s a possibility, in our opinion we think that’s a low probability just because of what we have seen about the bedrock in that hillside. If our interpretation is correct, that should be a fairly low hazard.”

Machan emphasized that the firm’s analysis was preliminary, and the area would require further study before coming to any conclusions.

He advised the borough to find ways to monitor the area as it considers making decisions about increased access to Beach Road and resuming activities in the area.

“If you were to allow it to be open, then I would recommend you take frequent looks at it to see if it needs additional repair,” Machan said. “Think of the different risk factors and also watch and observe how it changes.”

Beach Road residents living on the other side of the landslide have struggled to access their homes this winter. A makeshift pioneer road was built over the debris to allow vehicles across for a brief period of time.

On Tuesday, the assembly decided unanimously to reopen the road. Mayor Douglas Olerud said that borough officials, construction experts and Beach Road residents would form a working group to chart a path forward for restoring access.

“This group would come up with a working plan to keep the pioneer road open, drivable as much as possible until we can get to the stage where we’re opening that up. Whether it’s building a road on top of the slide or excavating the material, that’s what we’re hoping they can tell us a little bit more with their next phase of study in that area,” Olerud said.

Road access is not the only issue for Beach Road residents. Homes have also been cut off from the power grid, and Alaska Power and Telephone said it will not begin laying down power lines until the area is declared safe and there is a road providing access at all hours for full-size vehicles.

Some homeowners are still wondering if their homes will ever be safe enough to return to or if they will be condemned and bought out. Beach Roadhouse owner Todd Winkle called on the assembly to work with Beach Road residents on these issues as well.

“Everyone out there has different feelings. We’d like to be able to pursue a future for every individual out there that helps get them to where they want to be, whether or not it’s achievable,” Winkle said. “If that committee can maybe span beyond the road but also talk about what can we do to help people whose properties were impacted or whose feelings about living out there were impacted. I think working with them is the proper avenue.”

Displaced Beach Road residents have also called on the borough assembly to relieve them of property taxes until a reliable roadway, power and telecommunications are restored. An ordinance is being drafted to make that possible and will be considered at the next assembly meeting.

Murkowski said she is pursuing ways to aid the hard-hit tourism sector, including exceptions to the Passenger Vessel Service Act that keep large cruise ships out of the state this year. 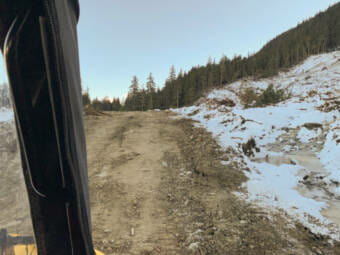 Displaced Haines residents have begun using a temporary road to access properties on the other side of a landslide that destroyed four houses and killed two people last month. 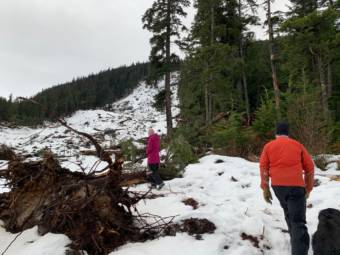 Members of the Haines bear task force have discussed using a landing craft or even a helicopter to haul out food from Beach Road homes.