Near the beginning of the popular Airport Dike Trail, a big pipe juts into the Mendenhall River. Ducks quack and do laps near the gurgling pipe, which is exposed when the river is low. If the ducks could read the sign up on the river bank, they’d know they’re swimming around in water straight from Juneau’s biggest sewage treatment plant.

“I would not let my dog play in that water,” said Guy Archibald, a wastewater expert and staff scientist with the Southeast Alaska Conservation Council.

Most of Juneau relies on the Mendenhall Wastewater Treatment Plant to process sewage. But the facility has struggled in recent years to keep the treated water it pipes into the Mendenhall River clean enough for environmental regulators.

City-hired wastewater experts figured out some of the problems. But one mystery is why a system that serves roughly 20,000 people is producing sewage they’d expect from about 50,000.

There are several regulated pollutants the plant isn’t consistently meeting its discharge limits on. The one that’s a direct concern for people’s health is a bacteria called fecal coliform.

“Fecal coliform in and of itself can cause illness,” Archibald said. “But the fecal coliform test is actually — they call it an indicator organism.”

Meaning, if there’s fecal coliform in the water, that’s a strong indication that other, more harmful bacteria and viruses are, too.

On some days in recent years, the plant has piped water into the river with fecal coliform levels two, three and four times the permitted limit. On one day in December 2018, it was 156 times its permitted limit.

Archibald said he isn’t necessarily worried his dog would get sick — our canine companions are pretty resilient to stomach bugs that harm people.

“But again, that dog comes out, then it jumps into the backseat of your car, maybe next to where you have your child strapped down in the car seat, you know?” he said.

Public health officials track outbreaks of many illnesses, including those associated with fecal coliform. Fortunately, Alaska Department of Health and Social Services spokesperson Clinton Bennett said none have been identified or reported in Juneau over the last several years associated with what’s coming out of that pipe.

Juneau wastewater engineer Lori Sowa said the fecal coliform discharge violations occurred when the plant was in an “upset.” That could mean the amount of sewage coming into the plant ramped up abruptly. If there’s too much, too fast, the plant has to spend less time treating wastewater that comes into it.

Or it could mean a “slug” of especially nasty sewage hit the plant, like fats, oils and greases, medical waste, chemicals, food waste, even beer when something goes wrong at the Alaskan Brewing Company — more on that later. That stuff can disrupt the balanced conditions the helpful microbes at the plant need to grow and consume the sewage quickly.

Ryan Hosman is a senior wastewater operator, and he’s pretty into his job. During a tour of the plant, he said he got into the field about 10 years ago.

“I was a manager of Pizza Hut. … Somebody asked me the question, ‘Where do you see yourself in five years?’ And I just — it really hit me, and I was like, ‘Wow. Not doing this!’” he said with a laugh.

At a lab on site, he preps a slide with a few drops of cloudy, partially treated sewage.

Under the microscope, he identifies helpful and harmful single-celled organisms squiggling around.

“So you can see some of the ciliates crawling around here. … And then here’s rod-shaped bacteria right here, kind of swimming around. … So right here, we see a limicola strand. Those are one of the undesirable microorganisms,” Hosman explains.

Spot checks like this happen daily. It’s one of many pieces of information that may signal a need to tweak dissolved oxygen levels, the concentration of solids, water levels or the ratio of microbes to sewage in the mix.

“We’re basically just no other than bug farmers, right?” he said from a catwalk overlooking some of the treatment basins. “I mean, ‘cause there’s hundreds, hundreds of different types of microorganisms down there. And we want to try to select just a small group of them.”

Tweaking their environment doesn’t have an immediate effect.

“If you wait to correct the problem — it’s too late. Because it’s microbiology,” Hosman said. “When you make a change, it takes a few days for it to take effect. … It’s kind of like trying to stop a cruise ship. It’s just not going to stop on the dot, or make a 180 right away, you know?”

City-hired wastewater experts with Tetra Tech identified some issues with regular operations at the plant that contributed to discharge violations. For example, the ultraviolet lights that disinfect the outgoing water needed to be cleaned and changed more often.

Tetra Tech also found a big picture problem on the other end of the pipes — Juneau’s putting more than twice the organic matter down the drain than expected from the population served. It’s too much for the plant. And it isn’t entirely clear why there’s so much.

Geoff Larson is a co-founder of the brewery, which is one the city’s biggest water and wastewater customers. He’s also held an industry seat on the city’s utility advisory board since it started in 2003. The board has helped write policies to get the city’s wastewater system on better financial footing and plan long-term for capital projects.

Larson said the brewing company is committed to working in good faith with the city’s utilities.

“From the very beginning we established a rapport, so to speak, to be able to make sure that one of the most vital parts of our infrastructure — that service that we have to have, which is water and wastewater treatment — could be provided most efficiently by the city,” Larson said.

That’s part of why the brewery is in the Lemon Creek area, to be physically close to the wastewater treatment plant.

Larson said if things go awry at the brewery, they’ll call the treatment plant and give the operators a heads up. For example, he said a valve failed on a tank a few years ago that sent a slug of beer gushing down the drain.

Larson said the brewery also installed surge tanks to make its discharges more consistent and easier to treat. And they separate and dispose of some of the solids in their wastewater before it goes down the drain.

“Again, that comes from the dialogue of, ‘What do you need from us? What can we do to help?’” he said.

There are likely more in the plant’s service area putting tough-to-treat waste down the drain. But the last time the city put together a complete list was in 2002.

The city has promised the Alaska Department of Environmental Conservation that it will have a fresh industrial user survey done by the end of May.

Another known problem with the city’s sewage infrastructure is rain. Decades ago, it was normal for storm drains to pipe right into the sewer system. Building codes and practices have changed so stormwater is not supposed to go to treatment plants anymore. But some stormwater systems are still improperly tied into the system. And rainwater has other unintentional ways of getting into the pipes.

Wastewater engineer Lori Sowa said rainwater usually dilutes the wastewater stream. But storms can also send slugs of solids that had settled in the pipes their way. Amid the record storm in December, for example, the plant processed 6.1 million gallons of wastewater in one day, about three times a typical day.

The city’s committed to examining this phenomenon beginning this summer into 2024 with new flow meters throughout the collection system.

These are a few of many deadlines in the agreement the city signed with regulators to clean up its wastewater system. Other deadlines go out to 2025. There will be more in-depth studies, evaluations of other treatment technologies and facility upgrades, and new strategies for managing both what goes down the drain and how to treat it.

In the final story in KTOO’s deep dive on sewage, we’ll find out about governance issues that let these violations stack up, and how Juneau’s officials intend to fix them. 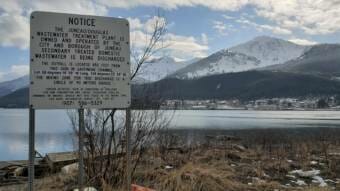