Alaska providers are following the federal recommendation to pause use of the Johnson & Johnson COVID-19 vaccines while they figure out the clotting risk.

About 6.8 million doses have been administered in the U.S., and a handful of people have gotten a rare blood clot afterward.

During a mid-morning call, state medical officials said they’ll be talking to all of the Johnson & Johnson providers in the state about what to look for and what to do with the vaccine supplies they currently have.

Pharmacist Coleman Cutchins said this type of issue with new drugs happens often because clinical trials are performed on just a few thousand people. Then, when the drug or vaccine gets to market and millions of people start taking it — these types of rare side effects become clear.

“I remind people that Ibuprofen has a similar bleeding risk to this and it’s in the black box warning on the packaging,” he said.

The specific type of clot that the Centers for Disease Control is investigating is called a cerebral venous sinus thrombosis or CVST. And it’s essentially in an area of the brain where when the blood clots off, it can cause a lot of pressure to build. The symptoms can vary, but Providence Alaska Medical Center Dr. Lisa Rabinowitz said when it’s severe – symptoms are similar to a stroke.

“So headache, visual changes, dizziness, syncope or passing out, decreases coordination or weakness on one side, one arm one leg. Seizures and even a coma,” she said.

One issue is that the go-to medication for these clots can make people sicker because these clots are being seen in combination with low levels of blood platelets.

“So we’ll be getting that information out to providers throughout the next few days,” she said.

The CDC’s principal deputy director, Dr. Anne Schuchat told NPR that people who got a Johnson & Johnson shot more than a month ago are at low risk for developing a clot. But people who got one within the last few weeks should be on the lookout for symptoms like headache, abdominal pain and shortness of breath and should seek medical treatment if they develop them.

The data the CDC released indicates that there may be about a one in a million risk of blood clots. The agency told NPR that it expects this pause to last for a “matter of days.”

While the state health department hasn’t yet heard from all of the providers it knows are using the Johnson & Johnson shot — they’re scheduled to meet with many of them Tuesday afternoon —  state health officials, municipalities and providers in the state said that halting the use of this particular vaccine isn’t much of a burden.

A spokesperson for the Alaska Native Tribal Health Consortium said the group is following the guidance to pause use of the vaccine. But, she said, the Johnson & Johnson vaccine isn’t a big part of the organization’s vaccination plans because they had just started ordering it.

At Juneau’s city-owned hospital, Bartlett Regional, infection preventionist Charlee Gribbon said they’d given out 10 vials of the vaccine by the end of March. That’s about 50 doses. The hospital got 20 vials in April and has used five of them so far, Gribbon wrote in an email. They’re pausing on using the rest of them and waiting for further direction.

Gribbon wrote that so far there haven’t been any adverse reactions.

Gribbon said Bartlett hospital was relying on the Johnson & Johnson vaccine to vaccinate people who are needle-phobic, who only want one shot or who want a vaccine that seems a little less experimental.

Unlike the Pfizer and Moderna vaccines, the Johnson & Johnson vaccine is a viral vector vaccine. That means it uses an inactivated cold virus to stimulate the body’s response to COVID-19. It doesn’t contain live virus, so you can’t get COVID-19 from it.

“The needle phobia thing is significant,” he said. “There are people who have a sort of automatic response to needles and it’s not necessarily something they control.”

But, it won’t affect the city’s planning too much.

“I think that we’ve only just scheduled our first Johnson and Johnson clinic,” he said. It’s supposed to be on Friday. They’ve decided to switch that clinic to the Pfizer vaccine.

There are a number of providers in the state listed as using the Johnson & Johnson vaccine in upcoming clinics.

In Juneau, Barr said individual providers can trade in their Johnson & Johnson vaccine supplies to the city for a different kind.

As of April 12, there have been at least 11,178 Johnson & Johnson vaccine doses administered in Alaska out of 35,500 doses allocated to Alaska so far, according to state data. Those doses have been delivered to a combination of sites like outpatient clinics, pharmacies, federally qualified health centers, local public health authorities and health systems.

Those figures don’t include the doses administered by the Veteran’s Administration or Department of Defense.

One thing that state and local health officials in Juneau are questioning is whether the rare event of a blood clot outweighs the benefit of getting large numbers of people vaccinated against COVID-19.

Gribbon wrote that there are other types of commonly used medications that have much higher risks — like some types of birth control. She said it’s important to know about the risks of contracting COVID-19 and of adverse reactions to a vaccination to make informed choices.

“Yes, there may be something that is happening in a rare group of people,” she wrote. “And people should know how to recognize a clot and get treatment. We can treat a clot, and we can treat [COVID-19]. But making an informed choice about known risks and how to manage them is what this is all about.”

Another concern is that this revelation will cause people who are already hesitant to get vaccinated for COVID-19 to be even less inclined to do it.

“This is a concern that will cause some people to be more hesitant about the vaccine,” said the state’s Chief Epidemiologist Dr. Joe McLaughlin. “In terms of how we counter that, I think the biggest thing is really relaying the information … It’s really important to be as transparent as we possibly can as quickly as we possibly can so that the public realizes that we’re not holding anything back.”

The CDC will meet on Wednesday to review the cases and the Food and Drug Administration is also continuing to investigate.

Editor’s note: This story has been updated. 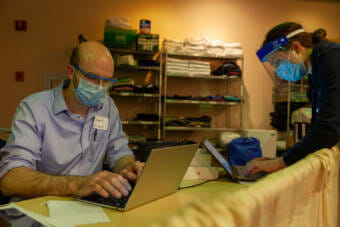 The latest COVID-19 vaccine boosters have arrived in Juneau

Most people who have had their primary vaccine series are eligible, but children under age 12 are not.