It’s budget season again and Juneau city leaders are projecting another year of spending more than the city brings in.

But, city manager Rorie Watt told members of the Juneau Assembly’s finance committee that it could be worse. The city is supposed to get $12.8 million from the American Rescue Plan Act — that’s the latest federal economic stimulus bill.

“Not to say that it’ll be a slam dunk, but the position we find ourselves in — nearly $13 million to the better makes for a substantially different budget season,” Watt said.

Those funds could go a long way toward filling Juneau’s budget gap, depending on how Assembly members decide to spend them.

In his budget message to the Assembly, Watt said there will likely be public calls to instead use that funding to support Juneau’s struggling families and businesses. But he also noted that there is more than $1 billion coming to the state government that could benefit people who need help as well.

Last year, the city spent a lot of money during the pandemic that the Assembly hadn’t originally budgeted for — that’s everything from city busses running for free to standing up an emergency operations center.

It wasn’t bringing in as much money either. In addition to the massive hit from the loss of the cruise season, Juneau also lost funds from the closure of libraries and pools and city recreation facilities.

The city got federal stimulus funds from the CARES Act and reimbursement from the Federal Emergency Management Agency, but the end result of the unexpected expenses is a nearly $4.6 million gap between what the city made and what it spent.

Watt is recommending that some of the funds from the American Rescue Plan be used to backfill that loss.

The city’s finance office is projecting that it will bring in slightly more money next year than it did last year. But Watt’s budget assumes that life will be slow to return to normal, and while the city might see an uptick in independent travelers this year, the lack of a cruise season will still be a huge hit.

Still, Watt’s budget is not balanced. It anticipates a more than $7.8 million shortfall that the city will have to absorb.

This budget isn’t final. Assembly members ultimately must decide how money will be spent. They’ll be meeting every week to talk about it through the end of May — including this coming Wednesday when they’ll be hearing from the airport, hospital and Eaglecrest. They’ll also be talking about the American Rescue Plan Act and what it means for the city. 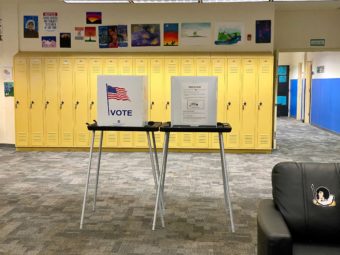 Bethel students are going to the polls this week. They’re voting with Sharpies, and there’s only one question on the ballot — it’s up to them to pick the sign that will mark a local playground.