Before last year, Cathy Carlson never imagined she could end up homeless.

She’d lived in public housing but was evicted for failure to pay her rent. She said she didn’t have an income, and she didn’t know where to turn.

“‘Cause I was not on my medication. I’d had three strokes. And I have to be on antidepressants, and I wasn’t, and I couldn’t say two words without crying,” Carlson said.

Eventually, the Sitka Homeless Coalition and the SOS: Lifeline group helped her find and rent a room in someone’s house. She said she’s back on her medication, and she’s re-applying for disability and public housing. All of that has been a lot easier with a roof over her head.

“I got my place, and I was able to see my doctor. I mean, I could have when I was homeless, but they always ask you where you live and it was embarrassing to say ‘in my car, Crescent Harbor, usually,’” she said.

Still, Carlson was homeless for a year. If Sitka had a local homeless shelter or temporary housing, she could’ve gotten back on her feet a lot sooner. But despite decades of efforts by various organizations, Sitka has no homeless shelter. In Sitka’s 2020 Point-in-Time Count, 17 people identified as experiencing homelessness, although the number is likely higher if you include people sleeping in their cars or on friend’s couches.

Gayle Young, who heads up the Sitka Homeless Coalition, puts the number of people who are chronically unhoused at around 15.

“And I think other people are probably fascinated by the fact that we’re just looking to house around 15 people when they have thousands to house,” Young said.

After trying for years to open a shelter in Sitka, the Sitka Homeless Coalition is now turning to a possible tiny home community to help tackle chronic homelessness, a project that could provide crucial support and shelter for people like Carlson who’ve faced housing insecurity. Agnew Beck Consulting completed an initial planning report for the Coalition in August, but there’s still a lot of work to be done before the project gets off the ground.

So far, Young said, there hasn’t been any pushback.

Back in 2017, Young and a friend started working to open a winter night shelter in Sitka. During her frequent walks around town, Young had gotten to know many of the people who are chronically homeless.

Young started the Sitka Homeless Coalition, and went looking for a space. But the going wasn’t easy. At one point, the Coalition partnered with the Presbyterian Church but faced pushback from the neighborhood, and then the church closed. Other times, it secured grant funds to lease a space but had to return the money when the place fell through.

Young was determined not to give up. So the organization started a laundry and showers program to help anyone in Sitka facing housing insecurity. And as they continued building relationships with those they serve, Young started to realize that a shelter might not be the right solution anyway.

Many of the people the Sitka Homeless Coalition serves are older men. They have disabilities and substance use disorders. A lot of them are constantly in need of basic supplies because they don’t have a place to lock up their things.

“As we got to know them more, we realized that a winter shelter would not solve the problem,” Young said. “They needed the whole home situation, not just a night six months out of the year on the floor.”

“And we were looking at big cities, small cities, rural communities like — how did you start? How did it work? What doesn’t work?” Green said.

Two pieces of advice stood out. The first was to implement a housing first model. The idea is to get someone into housing as quickly as possible and then offer them supportive services onsite. There’s no time limit to how long someone can stay and very few requirements.

“What they found is that after someone has a place and maybe a lock on the door and all their stuff in one spot, then they can start thinking about other things in their life like a job and sobriety and reconnecting with their families and all of that,” Young said.

A handful of Alaska cities are already using the model. A 2011 University of Alaska Anchorage study of Anchorage and Fairbanks housing first projects found that the programs had significant health benefits to people who otherwise would’ve been sleeping in shelters or on the street. The programs reduced alcohol consumption, kept previously unsheltered people housed and increased consistent use of important medications. Another study of a Juneau facility found that people’s use of emergency services reduced dramatically once they moved in.

“Housing first is a model that I really like a lot because it provides housing to people, regardless of where they are in life, so no barriers to housing, and they are also no strings attached,” she said.

Lovishchuk said a big part of what’s made their project successful is bringing all of the stakeholders to the table.

“It just so happened that Juneau had really the right combination of stakeholders, who really cared and also had really amazing statewide partners, who also were funders, and who really understood what was needed, and were willing to work with our community to make sure that this project succeeded,” she said.

The second main piece of advice was to build individual units rather than group housing, so everyone has a space of their own, which can alleviate safety concerns. Young and Green envisioned a community of 12 tiny homes. Each one would have a small kitchen and bed. There’d be a communal shower and laundry facility, and an employee onsite to help connect people with services, if they want them.

The next question was where to put it.

Young, Green and Carlson dodged branches as they hunted for pink flagging in a wooded lot at the end of Jarvis Street. The undeveloped land belongs to the Alaska Mental Health Trust Authority. The Trust recently sent a surveyor to mark a section for the potential tiny home project.

They’re hoping to use just one to two acres of the 16-acre lot and expand later if needed. After struggling to find a good location for the project and earlier iterations, Young says she thinks they’ve finally found the right spot.

“This land traditionally has been where homeless people have had camps,” she said.

Young first set her eyes on this land when she was looking at a map in the city planning office. “On this piece of property it said ‘MH,’ and ‘MH’ to me means mental health,” she said. “And I thought, bingo, that’s it.”

The Trust serves people with mental illnesses, substance use disorders, developmental disabilities, Alzheimer’s and traumatic brain injuries. That’s why the organization has been supportive of the project, said CEO Mike Abbott.

“Although homelessness itself is not a qualifying condition, you know, in terms of qualifying you to be a trust beneficiary, it is highly likely that if you are in fact chronically homeless, that you suffer from one or more of those conditions,” Abbott said.

The trust’s million acres of land is typically used to generate revenue for their programs — things like logging, mining or oil and gas development. But when Young approached them about leasing land for a project that directly benefits those they serve, they were receptive.

“So that’s a little bit different, but it’s a welcomed difference as far as we’re concerned,” Abbott said.

Nothing is finalized. Abbott said the coalition will need to demonstrate a feasible financial plan before they’ll consider a formal grant proposal. The Trust-funded planning report puts startup costs at just over $1 million. That doesn’t include ongoing operating expenses.

They’ll also want to see strong community support, which City Planning Director Amy Ainslie said has been an issue in the past.

“You know, sometimes finding an ideal location can be difficult. Because it’s one of those things that people can support in abstract but might have strong opinions about where is the appropriate place,” Ainslie said.

She said they’ll also need to bring utilities to the lot and meet any building code and zoning standards.

“I think this will be an interesting case from a zoning perspective because I don’t know that it neatly fits under any of our predefined uses that we have in our code. So, to some extent, there might need to be some interpretation about, you know, what do we classify this type of use as,” Ainslie said. “That will probably take a little bit of work, but I don’t anticipate that it would be an insurmountable barrier.”

The challenges are endless, but Young is unfazed. She hopes to raise the money and build the houses locally.

“Things have just worked out just in an amazing way. So I’ve learned to just not go there until it’s time to be there. And then see what’s going to happen for a particular situation,” Young said.

She said eventually they could add more services like a community garden, life skills classes, and employment opportunities. But the first priority is to get people out of the rain and sleeping on mattresses. 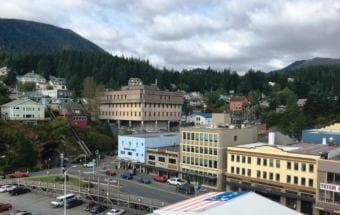 The measure would allow the city to confiscate tents, bedding, medications and food with 72 hours’ notice. 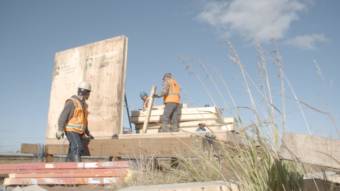 More tiny homes are coming to the Y-K Delta, thanks to pandemic relief funds. But are they a good idea?

Because these grants are tied to coronavirus relief funding, tribes must use the homes as isolation or quarantine units, at least at first. 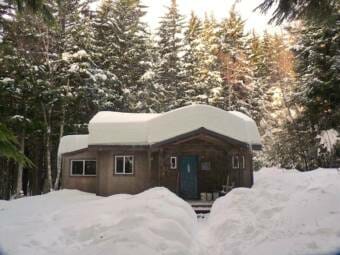 Too much snow on your roof can be dangerous

Erik Stevens from the Haines Avalanche Center says addressing your snowy roof while it’s cold can prevent problems later on when it warms up.