“Three of us? Excellent,” he said cheerfully, behind a face mask. “Can I just have one person sign-in for the contact tracing?”

He asked them where they’d like to sit. Just two other tables had customers.

If you would’ve asked Anderson a couple years ago if this was a good day for business, he would have told you: No way. But more than a year into a pandemic, his answer is: Yes, it’s a good day.

“It’s not like it used to be. But people are coming, and over time, seats are filling up,” he said. “We’re moving slowly in the right direction.”

Cautious optimism is a theme on Anderson’s block of Fifth Avenue, between D and E Streets. There’s restaurants, a furniture shop, office space and empty storefronts. Together, they provide a view of how businesses have struggled, especially in the city’s downtown core, as a multi-year recession glided into a pandemic, and thousands of Anchorage jobs disappeared.

As the city settles into spring, the managers of the businesses that survived said they’re starting to see hopeful signs, with warmer weather, the lifting of capacity restrictions and more vaccinated people returning to some of the rhythms of pre-pandemic life. But, things are still far from normal, and with tourism not expected to surge back this summer, they’re taking it day by day.

“It’s almost like we’ve been swimming for so long, and trying to get our head above water,” Anderson said. “We’re almost to the point where we can start breathing again.”

Just down the block last Friday, at Furniture Classics, owner Colleen Hickey sat behind a counter, with a stack of catalogs in front of her.

“It’s been the most difficult year, I would say, ever,” said Hickey, who opened the furniture shop on Fifth Avenue in 1989.

“That was the time of Exxon Valdez,” she said. “And it was pretty bleak around here. We’ve been through good times and bad, but this would definitely have to rank as the most difficult.”

The store was quiet that afternoon, except for a Billy Joel song playing over the speakers. There were no customers in the store. Hickey said it’s been impossible to predict what business might look like on any given day. She has tried to pivot to more interior design work over the past year, with Alaska’s housing market a bright spot in the pandemic.

“We had a fairly busy morning,” she said. “We had several people in right off the bat, which surprised me. But now, it’s very quiet. So you just don’t know.”

Hickey said she worries about her shop and others withstanding another blow, after the recession and the pandemic ate into savings.

“If we were to have a real downturn again, due to COVID or shutdowns or that kind of thing, I would say all bets are off,” she said. “I mean, you can tell how many businesses have simply gone away.”

The coronavirus pandemic is reshaping cities across the country, and what will emerge in downtown Anchorage is still unformed.

In the city, the pandemic has “damaged every industry” and led to its largest ever drop in jobs, according to a January report by state economists.

Anchorage lost nearly 14,000 jobs in less than a year. Bars, restaurants and hotels got hit the hardest, as both Alaskans and tourists stayed home, and the city put in rules to slow the spread of the coronavirus.

Next to the furniture store on Fifth Avenue, Ginger is among the many businesses that cut jobs to stay afloat. The restaurant has roughly two dozen employees now, said Matt Gill, managing partner. But it’d normally have about double that.

“This past year, honestly, I have not even looked at it as a business. I’ve looked at it as us just trying to keep our heads above water, and keep people employed,” he said. “I’m just happy to keep the doors open.”

On the east side of the Fifth Avenue block, next to a corner parking lot, sits a largely empty space that was Escape Salon and Spa. It appears to have closed last spring under the government’s coronavirus mandates, and hasn’t reopened since.

The owner didn’t respond to interview requests for this story.

The salon’s closure left Club Paris, one of the city’s oldest restaurants, book-ended by vacant storefronts over the fall and winter.

There once was a gift shop on its other side, but it shuttered a few years back.

Club Paris co-owner Scott Selman remembers looking back at the empty spaces from across the street earlier this year. Paper covered some of the salon’s windows. People sought shelter under the awnings.

“I swear to God, it was apocalyptic. It was one of the most depressing sites I’ve ever seen,” he said.

Club Paris has been in the Selman family for decades.

Selman’s dad bought into the restaurant as a silent partner in 1976, and later became the sole owner.

Selman and his brother now co-own the iconic restaurant, which he said they had to partially reinvent over the past year.

While fine-dining and Styrofoam boxes seemed “incongruent,” he said with a laugh, they changed up the restaurant’s menu so they could sell more takeout. They also leaned on grants, loans and a lot of community support.

“I’m going to tear up just thinking about it,” Selman said. “As soon as word got out about how dire it was, we got emails, people sent us checks to get us through, people did more ordering from takeout.”

Selman described the current state of business as “sustaining, but not flourishing.”

But in a good sign for the block, the space east of the restaurant was recently rented, local realtor Charles Scherbaum said. He believes it’ll be a salon again.

Scherbaum is still trying to lease the former gift shop. But, he said, the pandemic has made renting commercial space more difficult, with some businesses hesitant to take on a new lease and new risk.

The office building on the block has a sign in its window: It’s also leasing space. The property manager declined to comment for this story.

Scherbaum said he sees this period as “just another dip in the road” for downtown.

“Having lived in Anchorage for over 50 years, I feel that the city will come back,” he said.

It’s unclear how long it will take downtown to recover.

Many people are hungry to return to a normal routine, including going out to eat and shopping, said Nolan Klouda, director of the University of Alaska Center for Economic Development. But the one-two punch of a recession and a pandemic will likely make for a slower timeline to regain jobs.

“It could easily take, you know, four or five years just to get back to 2019 employment levels, which were already lower than 2015 employment levels because of our prior recession,” he said. “So, it does show you that we’ve got quite a bit of ground to make up.”

Many big questions remain too, he said. What will tourism look like this summer without big cruise ships? And how many Alaskans will return to their offices?

Back at Fat Ptarmigan, the restaurant’s tables were still spread further apart to comply with the city’s distancing rules. A server brought a pepperoni and mushroom pizza to a customer who works downtown and was on his lunch break.

“My big issue is the support that we continue to give to downtown,” said the customer, Eddie Parker. “So I’ve been doing what I can. And that’s why I’m here today.”

Parker is among the locals who have helped keep the restaurant going during the hardest stretches, said Anderson, the manager.

And, after a year of mostly relying on grants, loans and savings to help cover costs, the restaurant is getting closer to breaking even. 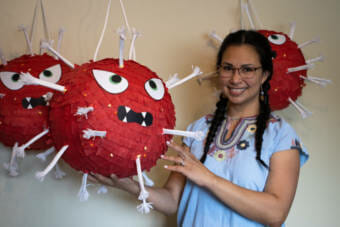 Alaskans were eager to get their hands on a version of the coronavirus they could easily destroy. 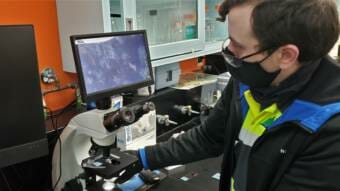 The Mendenhall Wastewater Treatment Plant serves roughly 20,000 people, but it's producing sewage experts would expect from about 50,000.