Alaska experienced a year of deflation in 2020. It’s the first time the trend has ever been recorded in the state.

The data appears in the state’s consumer price index, which includes information from Anchorage and the Matanuska-Susitna Borough.

Neal Fried is an economist with the Alaska Department of Labor. He says the change is small — a 1.1% decline in prices.

Fried says housing and transportation costs made up for most of the declines last year. And some costs, like food and medical care, actually increased.

According to Fried, there are pandemic trends that account for some of these declines. For instance, when the cost of oil plummeted, so did gas prices.

The Bureau of Labor Statistics has warned that the pandemic may have impacted data collection.

Fried says 2020 was an unusual year, and deflation is unlikely to be a continuing trend.

“We’re not going to see deflation in 2021, that would be really unlikely,” said Fried. “I think this is going to be probably an aberration that’s not likely to be seen again for a long time.”

In fact, inflation has already been recorded in 2021 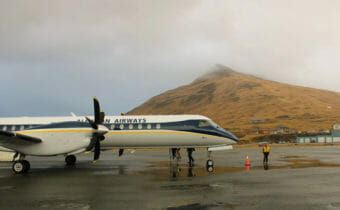 Previously, Ravn Alaska was the only airline offering regularly scheduled flights between Unalaska and Anchorage.