Legislative staff in Juneau get tested for coronavirus every five days.

“It’s not an abnormal thing, we just go get tested,” said Mary Jackson, a legislative staffer from Kenai.

“There’s a pokey-okey, long Q-Tip that they put up your nose and it’s a rapid test,” she said. “And you pop negative. Except sometimes you pop a positive.”

Konrad’s case was particularly bad. It started with a scratchy throat, but soon he could hardly breathe. He was sent to the critical care unit at Juneau’s Bartlett Hospital on March 8.

“They immediately put him on high pressure oxygen,” Mary said. “He was still breathing, he never went into the ventilator. That’s the ‘critical.’ Konrad has ‘severe’ COVID. I didn’t even know what that was, had to Google it to find out what that was.”

He spent a week in critical care. Finally, on Sunday, he moved to a regular hospital room where hospital staff can monitor his oxygen.

Mary said he’s on the mend.

“He came pretty close there. He came very close,” she added.

Nine staff and lawmakers in Juneau have tested positive for COVID-19 so far this year, including two yesterday. At the same time, two Republican lawmakers from the Mat-Su are rebuking Capitol mitigation protocols, which mandate temperature screenings and mask wearing for all who enter the building.

Mary doesn’t want to say how they think Konrad got infected, for privacy reasons. But Micciche said Konrad’s case was linked to a legislator who tested positive.

Mary, miraculously, didn’t get sick when her husband did. Now, she’s just days away from being fully immunized after receiving both doses of the vaccine.

She hasn’t been able to be with Konrad face-to-face because he still could be contagious. But they’re thrilled he’s out of critical care.

“For us, we’re blessed, I’m blessed,” she said. “My husband is alive. He’s doing very well. And we have had such an outpouring, of, as I’ve said, family. And the family includes the legislative family.”

Micciche said seeing Konrad get so sick made him realize how severe the virus is. Mary said she didn’t know anyone who got so ill before Konrad.

“I’ve always said it was the flu on steroids, kind of jokingly,” she said. “Well, it’s not a joke anymore. It is a flu, on steroids. It just hit us.”

She hopes others don’t have to endure what Konrad did.

The Jacksons have gone through this away from home. Outside of the session, they live in Kenai, on K-Beach Road. Konrad has worked for Micciche for years and was born and raised in Homer. Mary is quasi-retired from politics but recently ran Mayor Charlie Pierce’s campaign and is now working with Anchorage freshman Rep. Tom McKay.

They’ve gotten a lot of support from friends at the Capitol. Mary said they fundraised to cover some of their medical expenses, though she wasn’t sure how much those expenses will end up costing or how much they’ve raised so far. She said they do have medical insurance, and that her heart breaks for those who have had COVID-19 who aren’t insured.

Friends from the Kenai, too, have sent prayers their way.

“My phone was blowing up,” she said. “Konrad’s phone was blowing up and he’s having, obviously, a difficult time responding. He’s doing much better. But he can’t walk for very long without coughing. And you can hear the oxygen blowing in the background. So it’s not exactly convenient to jabber away.”

Konrad’s still in quarantine for another week, though he could be released from the hospital before then. Some people have experienced long-haul COVID-19 — marked by a persistence of symptoms like shortness of breath and fatigue.

Mary said those long-term effects are in the back of her mind but she was confident that the care he received at Bartlett has made him stronger.

“And that will go a long way for his long-term recovery,” she said.

She said they’re both looking forward to getting back to the budget talks in the Legislature. Konrad is also working with Micciche on getting his set-net buyback bill through the Senate. 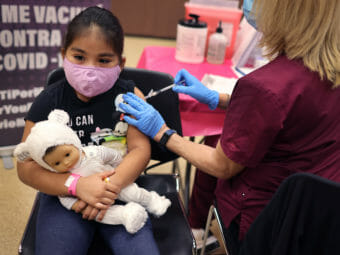 The authorization makes all children in that age group who received their second shot at least five months ago eligible to receive a third shot of the Pfizer-BioNTech vaccine.