On Thursday evening, around 9 p.m. a bald eagle made its way into the Alaska Ship Supply grocery store in Unalaska.

From outside, the store appeared closed and quiet — the lights were off, and the parking lot was virtually empty except for two local cop cars. But on the inside, store employees, police and a volunteer were chasing the unwelcome guest, waving long PVC pipes and tossing blankets and pieces of cardboard, trying to flush the bird out of the large building.

The eagle had gotten in through the back of the building, according to Karl Cristobal, who’s been working at the local store for about three years. He said he’s heard of a few eagles getting into the Alaska Ship warehouse, located at the back of the store, in the past. But since he’s been working there, he hadn’t heard of any actually getting inside where customers shop.

“It’s happened like four times, I guess,” said Cristobal. “This is just the first one inside.”

After over an hour of being chased up and down aisles by two police officers, store employees and volunteer Brie McGrath — a fisheries biologist with the local Department of Fish and Game — the bird finally tired out and fell to the ground. McGrath then gently but quickly trapped it in a fleece blanket, carried it outside and set it free near Margaret Bay.

This wasn’t the first time in her three years on the island that McGrath has helped rescue a trapped eagle. She’s volunteered to help with several “eagle wranglings.” She said she enjoys helping her feathered friends. This time, though, McGrath said she was worried about how long it was going to take to get the eagle out of the store.

“We’ve had one that was in a frozen warehouse similar to this — like the same size — and they couldn’t get it out for three weeks,” she said. “They got it out eventually, but it’s hard to get them out of those rafters.”

By the end of the night, the eagle wasn’t the only one that seemed exhausted. As McGrath struggled to catch her breath while carrying the large bird outside, it was clear that this was also a battle for her.

“I’ve never had one fight that hard,” she said. “It was struggling, but I think it’ll be okay now.”

McGrath said that despite a minor talon injury, the eagle looked good overall and should be just fine. 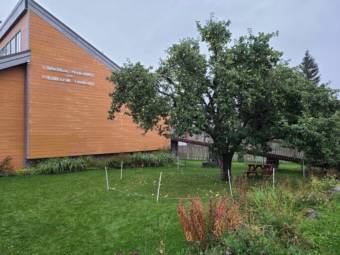