For years, residents of the Southeast Alaska fishing town of Pelican decried cuts to state ferry service that left them increasingly isolated.

Then came news of a deadly pandemic spread around the world by travelers.

“Everybody claims that it’s so hard to get in and out of here. I say, that’s perfect,” said Walt Weller, Pelican’s mayor. “There is no better time to be stranded in the middle of nowhere.”

A year into the pandemic, Pelican — reachable only by bush plane or boat — has zero recorded cases of COVID-19 and has vaccinated more than half its adults.

State officials say privacy considerations bar them from identifying communities without cases. But interviews and social media posts indicate Pelican is not alone. Alaska’s unique geography and isolation have helped some of its villages thwart the pandemic with astonishing success.

The state’s list of COVID-free communities includes at least 10 places, stretching from Pelican to the Aleutian Islands to deep in the Interior. In Southwest Alaska, where many communities have seen major outbreaks, officials at the regional tribal health care provider say six villages have nonetheless recorded no coronavirus cases at all.

Dr. Anne Zink, Alaska’s chief medical officer, said there’s a degree of luck playing into which villages have escaped the virus entirely. But she also sees “patterns of success” in ones that have kept numbers low.

“Mitigation strategies work,” she said. “And it’s been pretty amazing to see some of these smaller communities work incredibly close together, and collaboratively, to be able to keep COVID out.”

Many of the villages without COVID-19 cases are Indigenous communities with vaccination rates far exceeding 50%, thanks to an aggressive statewide campaign by tribal health providers to deliver the shots.

Take the tiny, far-flung Aleutian Island community of Atka, which is more than 1,000 miles from hospital care.

The town has recorded no COVID-19 cases so far, and 90% of adults are vaccinated, Mayor Crystal Dushkin said. Everyone but mask- and glove-wearing city employees are banned from meeting planes at the airport, she said.

In the 50-person village of Chalkyitsik, not far from the Canadian border in the Interior, tribal leaders got pushback when family members were barred from visiting during the holidays. But the off-road-system community has seen zero recorded cases of COVID-19, and now all of its adults have been vaccinated, said Stephanie Herbert, the first chief of Chalkyitsik’s tribal government.

The Bering Sea island town of St. Paul has also kept COVID-19 at bay by barring all but essential travel. Its 400 residents need permission from the city government, along with a negative coronavirus test, before they can return to the island from trips away.

At one point during the pandemic, a group of seafood processing workers arrived unannounced on a charter plane. To keep them from exposing locals, they were driven to their fishing vessel on the back of a flatbed truck, said Amos Philemonoff, the president of St. Paul’s tribal government.

Local leaders and health experts have been careful about drawing too much attention to communities without cases because of the lingering risk of an outbreak. But with vaccination rates in some rural areas now exceeding 75%, officials acknowledge certain villages are nearing what’s known as “herd immunity” — the point at which enough of the population is immune to stop the coronavirus from spreading.

“I am always concerned, until we get widespread vaccination out, about declaring victory too early,” said Zink. “But some of them, I’m really starting to feel like they may be getting close.”

Officials in communities with no known COVID-19 infections described an array of mandates imposed on residents and visitors, from travel restrictions to quarantines.

St. Paul worked with its local airline, Ravn Alaska, to ensure travelers are warned during online booking, and at the Anchorage airport, about the island town’s health mandates and testing requirements.

“There’s little chance that you’re going to miss that information,” said Philemonoff, the tribal president. “Otherwise, you’re probably not going to get off the plane in St. Paul. You’ll be in for a nice, long, round-trip flight.”

Before flying to the island, people have to fill out a five-page document, under penalty of perjury, that requires them to self-quarantine for two weeks, wear a mask, and stay in their car and ask for help when getting gas. The village has also arranged more than a half-dozen quarantine houses and other facilities for people without other options.

Travelers are met at the island’s airport by a van, Philemonoff said.

“The driver’s all decked out in a white suit, mask, gloves, the whole nine yards,” he said. “And he delivers you back to whatever house or facility you’re going to be locked down in for the next two weeks.”

In Wales, an Iñupiat village of 160 people at the eastern edge of the Bering Strait, leaders from the municipal government, tribal government and Native corporation met regularly last year to plan their response to the virus, said Mayor Clyde Oxereok.

Oxereok said Wales elders grew up hearing stories about the 1918 flu pandemic, which orphaned dozens of children and is estimated to have killed more than half the village’s population.

When the coronavirus pandemic arrived last year, Wales quickly restricted non-essential travel. Then, it ran into a problem in the summer with travel between villages, Oxereok said: People were driving to and from nearby communities that could be reached by four-wheeler.

Wales leaders ended up sending its mandates to those nearby villages, which helped fix the problem, Oxereok said.

“We had no manual to follow — this was all new to us,” he said. “We had to make everything up as we went along, according to what we were seeing in the news and hearing from other places.”

While many of the successful villages have maintained strict mandates, not all did.

In Pelican, which has 75 winter residents, community leaders posted signs, distributed masks and closed some buildings, said Weller, the mayor. But, he added, they did not “shut down the town.”

Weller said residents should get some credit for the work they did to keep the virus at bay. But he attributed most of Pelican’s avoidance of the virus to its isolation.

“I’m going to pat myself on the back and say I did a great job,” he said, “And at the same time call it 99% pure dumb-ass luck that nobody managed to get in here and spread it around.”

Weller said at least 50% of Pelican’s adults have been vaccinated, while state officials said 80% have received at least one dose.

While a number of villages are seeing similar rates of vaccination, community leaders said they’re not moving to relax their mandates quickly.

In Chalkyitsik, the fully-vaccinated Interior village with no COVID-19 cases, reopening is starting slowly, said Herbert, the first chief of the tribal government.

The majority of people there are still wearing masks, including students and staff at the local school. The village might wait until March to allow visitors again, she said.

It’s been a stressful year for tribal leaders, who endured complaints about the local health mandates, Herbert said. But ultimately, the town worked together to keep the virus out. 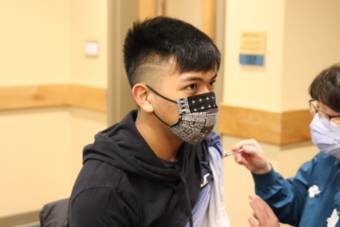 The announcement follows the federal Food and Drug Administration’s decision on Monday to authorize the use of the Pfizer vaccine for children 12 and up. 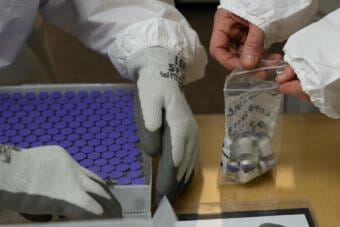 The FDA first granted Pfizer's request for an emergency use authorization, or EUA, for its COVID-19 vaccine in December. It got federal approval to include children as young as 12 years old in its vaccine trial last October.