Earlier this month, Canada extended a prohibition on cruise tourism to mitigate the spread of COVID-19. The decision effectively canceled Alaska’s cruise season because of the Passenger Vessel Services Act — a U.S. maritime law that requires large, foreign-flagged cruise ships to stop in Canada when traveling between Washington and Alaska.

Young’s legislation, called the Alaska Tourism Recovery Act, proposes a temporary workaround that would make roundtrip voyages between Alaska and Washington a foreign voyage under U.S. law. It would only apply for the duration of Canada’s cruise prohibition.

In a press release, Young wrote that the pandemic devastated Alaska’s cruise season last year and his bill would provide relief and certainty to communities that depend on tourism.

The Passenger Vessel Services Act isn’t the only hurdle that cruise lines must face before returning to Alaska. The Centers for Disease Control and Prevention will require all ships to meet certain conditions and complete a mock sailing to test COVID-19 protocols before returning to service.

The CDC is also still recommending that people completely avoid cruise ship travel while the risk of getting COVID-19 is very high.

Canada bans cruise ships for a year, taking another Southeast Alaska tourism season off the table

"Since the new year, the tea leaves and the news has been progressively more pessimistic for the return of cruise ships for the summer," said Juneau City Manager Rorie Watt.

Skagway Mayor Andrew Cremata acknowledged the summer season, usually worth an estimated $160 million, is going to be radically different. But he said Skagway is going to make it through another year. 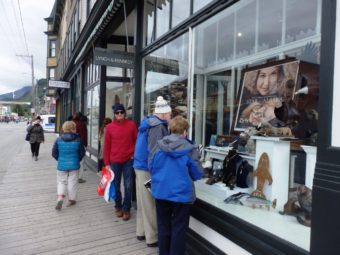 Small cruise ships are coming to Southeast Alaska, but not all passengers will get to mingle and shop in towns

A handful of smaller, boutique cruises plan to sail this year, but not all of them plan to allow passengers to stop in towns.