The first time Martin Stepetin went to the Unangax̂ cemetery at Funter Bay, he didn’t know how to find it.

“We looked all over inside of Funter Bay,” Stepetin said. “We went up to people’s cabins. And we’re asking folks, ‘Hey, do you know where this is — where the Aleuts were kept?’ And many people didn’t even know. And they lived there.”

The cemetery holds the graves of 30 to 40 Unangax̂ people who died at Funter Bay during World War II. In 1942, the U.S. government forcibly removed them from the treeless Pribilof Islands in the Bering Sea and took them to the Southeast rainforest about 1,300 miles away — with only one bag apiece and no hunting or fishing gear.

At Funter Bay they were left to fend for themselves, living in tents and the remains of an old mine and cannery, without clean water or medicine. About 10% of them died — mostly young children and the elderly — before they were allowed to return home in 1944.

Stepetin’s grandparents were held there. When he found the cemetery, he realized that anyone who stumbled on it would have no idea what they were seeing.

“Why is there a cemetery in the middle of the forest out in Funter Bay?” Stepetin imagined them asking. “Who are these people? What happened, and why are they here?”

Preserving that history is part of the impetus behind a bill that would add about 250 acres of state land, including the cemetery, to Funter Bay State Marine Park. That would mean the land couldn’t be sold or developed, and people would always be able to care for the cemetery so it wouldn’t gradually vanish in the forest.

But the bill serves a more immediate need.

Serafima Edelen is from St. Paul. She’s acted as a liaison between Pribilof elders and people in Southeast Alaska working to preserve the history of the internment. Edelen said the bill would also give people in the Pribilofs peace of mind that their loved ones won’t be disturbed.

‘We didn’t have a lot of persuading to do’

The bill to add the Funter Bay cemetery to the marine park almost became a law last year.

Edelen, who traveled to Juneau during the last legislative session with a delegation of elders from the Pribilofs, found most lawmakers were receptive.

“We met with a lot of representatives and legislators and went down to try to help promote the bill and make sure it was going to get passed and make sure we had the support we needed,” she said. “And almost everyone that we met with — we didn’t have a lot of persuading to do.”

Juneau Rep. Sara Hannan, the bill’s sponsor, said the elders’ work had an impact on lawmakers

“They came to understand the historical significance and importance of honoring those who were forcibly taken from their homes and died in custody of the U.S. government through neglect,” Hannan said.

She said the bill was well on its way to passing, with solid support from Senate leadership and committee chairs when the pandemic cut the session short.

For Hannan, who taught social studies and Alaska history before entering politics, passing the bill this year is a priority.

“I think it’s really important that we honor those families and protect their dead and that site,” she said. “And it allows us to point to educating Americans who don’t understand when we say ‘a relocation camp.’”

‘People do not know that this happened’

For the people working to get the Funter Bay bill passed, it’s only a starting point.

Niko Sanguinetti of the Juneau-Douglas City Museum describes the bill as part of a larger Funter Bay project that also includes a museum exhibit and a set of interpretive panels to be placed at the cemetery.

She helps coordinate among the groups involved in the Funter Bay project. They include the museum, Friends of Admiralty Island, private citizens, several Native governments and associations, and state and federal agencies. Together, they’re trying to preserve the history of the internment and the places where it happened.

“What we keep hearing from people here in Juneau, and really throughout the country, and throughout the world is that people do not know that this happened,” Sanguinetti.

Sanguinetti said the interpretive panels, which should go up in Funter Bay later this year, are “meant to follow the journey of the people” — from the forced removal, to captivity in Funter Bay, to rebuilding their wrecked houses when they returned home.

She said bringing the narrative through to the present was important to the elders who worked on the panels.

“Even though this is a terrible event, it didn’t destroy them,” Sanguinetti said, “And it doesn’t completely define them. So we wanted to make sure that we ended with the idea of hope.”

One of Serafima Edelen’s roles was working with Pribilof elders to make sure the panels and museum exhibit would get the story right — and tell it in the right way.

Edelen said in the past, many of the elders who went through the internment had been reluctant to talk about it. And they didn’t always agree on how much of the truth — which Edelen describes as “pretty dark” — they wanted shared.

For a long time, many of the people who were interned did not share their memories with their children and grandchildren at all.

“I hear a lot of stories of, you know, trying to listen through the vents when their parents or their older siblings would talk about being interned and the evacuations,” Edelen said. “And if they got caught, they were in trouble.”

She thinks part of the reticence was to protect younger generations from the trauma:

“I went through it and I’m just going to deal with it. You don’t need to know about this, you don’t need the hurt, I can handle it,” Edelen said.

There are important parts of the story that few outsiders understand: that the Unangax̂ were taken from a treeless island with endless views and dropped in an entirely alien, closed-in, forested landscape; that the men were forced to return to the Pribilofs in summer to hunt seals, leaving the women and children alone in Funter Bay; and that when it was over, they came home to find their houses ransacked and shot up by bored soldiers — and many of their religious icons gone.

Working with the elders ensured that those parts of the story would be told. But Edelen said everyone agreed it was important to tell the story in a way that would show the strength of the Unangax̂.

“We’re not trying to say ‘Woe is me,’” she said. “We wanted to portray that what we went through was uncalled for. There was a lot of mistreatment, a lot of trauma that happened, but the biggest thing we want to portray here is how resilient we are. We got through this. And we got through it together.”

‘It’s everybody’s history, not just ours’

Sanguinetti describes the Funter Bay project as a model that, if it succeeds, can be carried over to the other internment camps in Southeast Alaska. Funter Bay was a natural starting point because the cemetery is on state land, which means the site can be protected without asking anyone to give anything up. And Hannan said the bill, if passed, will not cost the state anything.

Some of the other sites could be more challenging.

Hannan said families have lost access to the cemetery at Killisnoo, near Angoon. The land changed hands a few years ago, and the new landowner has barred families from visiting the gravesites, citing liability concerns.

Stepetin hopes the group will tackle that one next.

“We want to get the Killisnoo cemetery back into a respectful order,” he said. “And bring that site out of private hands, hopefully, or at least gain reasonable public access to that cemetery.”

He said bringing the Funter Bay model to all of Southeast is a huge undertaking, but he sees the work as necessary.

“This history is just not Aleut history,” he said. “It’s Alaskan history. It’s American history. You know, it’s everybody’s history, not just ours. This could happen to anybody.” 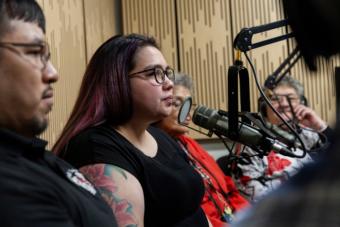 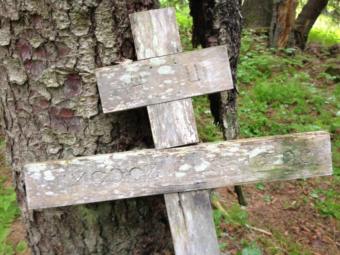 Alaska lawmakers are considering expanding a state park to include historic graves of Unangax̂ people who died in a World War II internment camp. 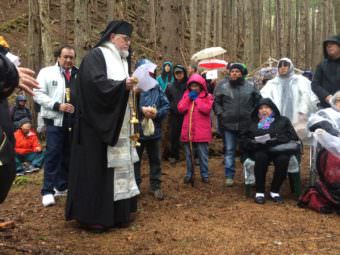 The internees, from St. Paul and St. George in the Pribolof Islands, were moved 1,300 miles against their will. Many died on the way and in Funter Bay over their two-year internment.