Maija Katak Lukin, a former mayor of Kotzebue, has been selected as the Native relations program manager for the National Park Service’s Alaska region.

She’s been superintendent of the Western Arctic Parklands since 2016, overseeing operations in 9 million acres that include Noatak National Preserve, Kobuk Valley National Park and the Cape Krusenstern National Monument.

“The Park Service in the Alaska Region has really moved towards listening to Indigenous people and the first Alaskans in the management of that land because, if you look at history, we’ve been managing that land very successfully for 13,000 years,” Lukin said.

She is Inupiaq and grew up in Kotzebue and the Sisualik fish camp, where she’s spent her life subsistence hunting, fishing and gathering.

She says that her work balances the land stewardship of her ancestors with the more modern federal protections.

“We travel to all of the villages in Northwest Alaska to have these hard conversations about what land management looks like to them, and listen to what they have to say,” Lukin said. “And try to be honest about our policies at the National Park Service, and be honest about what we could and could not change.”

In her new position, Lukin hopes to take her success in working with Northwest Alaska tribal groups to tribes and Native corporations across the state.

“Giving a seat at the table to Indigenous people and the people who live around national parks, monuments and preserves,” Lukin said.

Lutkin has been a local leader in Kotzebue serving on the city council from 2013 to 2016. She was elected by her peers in 2014 and served a year as mayor. She’ll relocate from Kotzebue to Anchorage to begin her new position in March. 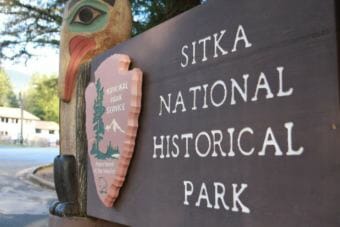 After a year of negotiations, Sitka Tribe of Alaska will partner with the National Parks Service to begin co-management of historical interpretation at the Sitka National Historical Park -- the first compacting agreement of its kind in U.S. history.

Even before leading John McPhee down the Salmon River, Pat Pourchot had his dream job

By 1975, when John McPhee showed up in Alaska, Pourchot was a skilled paddler, with three summers of river running experience behind him. But Pourchot had never heard of The New Yorker Magazine and didn't have any idea who John McPhee was.