Dorothy and Russell Colegrove, of Anchorage, decided during President Trump’s first impeachment they would come to D.C. to celebrate if Trump lost, no matter which Democrat won.

“The past four years have been, I think, quite traumatic, especially for those that feel disenfranchised by the presidency,” Russell said. “And so we just wanted to come here and feel the positive vibes of the new administration.”

It’s good they wanted to “feel” the Inauguration, because seeing it in person proved impossible.

With the pandemic and heightened security concerns, few Alaskans flew to D.C. for the inauguration. Even ardent Democrats and Biden-Harris campaign volunteers cancelled plans to attend. But the Colegroves, who had never voted for a Democrat for president before, felt passionate about witnessing America turn the page.

The Jan. 6 insurrection and the security measures that followed ensured the Colegroves would get nowhere close to the action. But they got up early and went to St. Matthew’s Cathedral. Dorothy said they might have caught a glimpse of the president-elect. Or someone.

“We got to see the Biden family and the Harris family exit the church,” Dorothy said. “Well, we know they were coming out with a crowd, and we saw the press there.”

The Colegroves are in their early 40s. He had an IT job. She works in the oil and gas industry, in regulatory compliance. They’re often mistaken for Republicans, Dorothy said, but she leans libertarian. In Trump, they saw the makings of an authoritarian, and it repulsed them. Dorothy said in 2020 she became a campaign contributor for the first time in her life.

Bowing to security concerns, they went back to their hotel room to watch the ceremony on TV. Dorothy said she choked up seeing Kamala Harris sworn in to the second-highest office in the land.

“It’s just so meaningful, as a woman, to see that. It doesn’t matter what your politics are,” she said. “To see somebody who comes from an immigrant background — that’s what America is made on.”

Once the ceremony was over, they grabbed their Alaska flag and went downtown to Black Lives Matter Plaza to feel the democracy. As she spoke about Harris, tears welled up in Dorothy’s deep-brown eyes. It was the only part of her face visible between her Biden-Harris mask and her Biden-Harris hat.

For every Dorothy and Russell Colegrove, Alaska has more voters who are disappointed. Donald Trump won 53% of the Alaska vote.

The Colegroves said they hope to find common ground with Republicans on local issues, if not national ones.

And Russell plans to reach out to the guy a few houses down from theirs, who planted a Trump sign on his lawn, just to let him know the Colegroves are open to being neighborly. 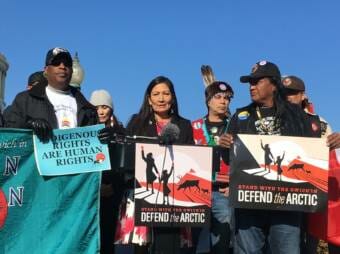 Deb Haaland, a Laguna Pueblo tribal member from New Mexico, would be the first Indigenous cabinet secretary. Alaska Native leaders have mounted a big campaign to confirm her. 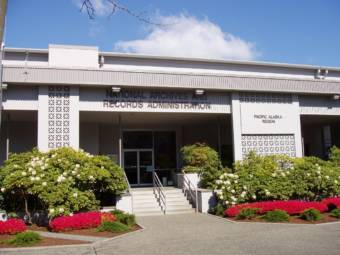 In January 2021, Washington state’s attorney general and 40 Tribes, states and community organizations filed a motion to block the sale of the building.