24 more Alaskans have died of COVID-19, the state health department reported Wednesday, the same day the state moved to the top of the nation in its vaccination rate.

The deaths represent the largest single-day tally for the state, but only one of the deaths is considered recent. The rest were discovered during a routine review of death certificates, according to state health officials. Wednesday’s report brings the total number of Alaskans who have died from COVID-19 to 251.

A review of previously-reported deaths found a nonresident COVID-19 death that was previously reported as a resident case. It is the second nonresident to die in Alaska of COVID-19.

Most of the Alaskans who died of COVID-19 were in their 60s or older and spread out around the state. Three of the deaths were on Kodiak Island, and two were in the Bethel Census Area. A resident of Wasilla in his 40s was the youngest victim of COVID-19 in Wednesday’s report.

Meanwhile, the state’s vaccination effort continues, with nearly 59,392 first doses given in the state. Speaking at a news conference Wednesday, Chief Medical Officer Dr. Anne Zink said Alaska became the state with the most first doses of vaccine administered per capita in the United States, according to CDC data.

“Oftentimes, we’re holding two emotions at the same time: seeing just the incredible devastation of this disease, as well as just tremendous hope on the forefront. Today, I would say it has been a very hopeful day,” Zink said.

Daily coronavirus case counts have remained low compared to the spike in November and December. Over the past week, case rates have ranged between a low of 130 on Tuesday and a high of 340 last Thursday.

But Zink and other health officials cautioned Alaskans to continue to take safety precautions to avoid a resurgence of the disease.

“We need to not let our guard down right now, because we are seeing some just devastating deaths in the Lower 48,” she said. “We’re losing a person every seven minutes in this country to COVID-19.” 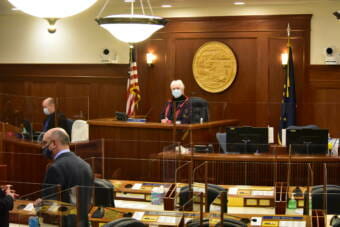 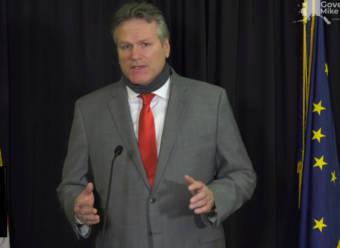