Wrangell’s first ferry in more than two months passed through on Friday, after weather delayed its scheduled arrival by more than a day.

It’s the only marine highway ferry that will stop in Wrangell in January.

Wrangell’s two ferries this winter — one in early November of last year and one on Friday — weren’t because of a complete lack of ferry service in Southeast. Marine highway ferries sailed within 20 miles of Wrangell Island at least eight times in November and December.

“You are virtually within sight of the dock at Wrangell,” Hastings explained, “and to not stop there — it’s really jeopardizing your shipyard as far as people being able to come to your community.”

He’s used to traveling to from Ketchikan, where he lives, to Wrangell for work on his 36-foot fishing boat.

“Without ferry service, my days of coming to the Wrangell shipyard are over. Because I don’t have the ability to be able to, to come and go when my vessel is up in the yard,” Hastings said. He estimates he has spent more than $100,000 dollars in Wrangell, taking into account everyday expenses and work on his vessel.

He says he believes other Southeast fishermen are in the same boat. The lack of ferry service means the Wrangell boat yard isn’t attractive any more.

“I’m really frightened for what the future is coming is going to bring as far as that shipyard Wrangell because that’s something you can’t lose,” Hastings added.

He’s not alone in his concerns. In a business survey late last year, the City and Borough of Wrangell found that more than 40% of local businesses said the lack of ferry service was hurting their bottom line. That response was unprompted — the survey didn’t have a question about the marine highway.

Service is scheduled to improve next month. The ferry Matanuska is slated to provide regular northbound sailings on Sundays. It’ll head south from Wrangell on Wednesdays. 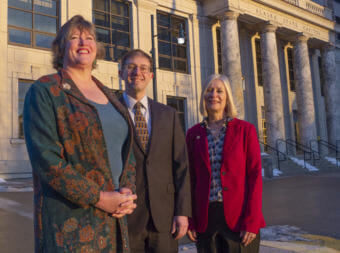