Searchers continue looking for the body of one of two men who drowned near Tuluksak on New Year’s Day. The body of one man was recovered over the weekend and has not been identified. The search for the missing men has become a training ground for a new generation of search and rescue volunteers.

Kyle Peter lives in Tuluksak. He was one of the first people to rush to the river after the accident, just after 7:30 p.m on Jan. 1. Two men, Peter Sallaffie and Joseph Hale, took the wrong trail out of town and drove their snowmachines into an unmarked open hole in the Kuskokwim River ice. Inside the village, Peter answered a call from a friend who told him the news. Together, they raced to the open hole.

“It was late. It was dark. We couldn’t see anything. So we gathered the group and said, ‘We couldn’t do anything today. We’ll have to come back tomorrow,” Peter said.

Peter, along with about 10 others from Tuluksak, have come back every day since, looking for the missing men. The group is young. Peter is 26 years old, and the others are around the same age. Tuluksak’s older, more experienced searchers are either hunkering down because of the pandemic or are related to the missing men. Yup’ik tradition says that relatives should not participate in organized search efforts for their kin.

For some of the young Tuluksak volunteers, this is their first time looking for a missing body. Peter has done it a few times before, but never quite like this.

“That was the first time I’ve done it with the snowmachine and rope,” he said.

Older, more experienced searchers from Bethel and Akiachak taught the young Tuluksak crew how to use a snowmachine to slowly pull a motorless boat across the open water with drag hooks hanging off it. The hooks scrape along the bottom of the river, looking to snag clothing or other gear.

“We just watched the Bethel crew for about an hour,” Peter said, “and then we started to understand what they were doing, and we started taking initiative.”

On Saturday, the day after the accident, the searchers pulled the snowmachines of the two missing men from the hole in the ice but didn’t find a body. They looked for the lost ones all day on Jan. 3, and in the final minutes of daylight, Peter and members of the young Tuluksak crew decided to drag the river one last time.

“Two of my buddies snagged onto something, and we stopped the boat, and then they started pulling it up and recovered one of the two lost [ones],” Peter said.

They boated to the water’s edge and pulled the body onto the river ice.

Bethel volunteers carried the body back to Bethel to be flown to Anchorage for autopsy.

Searchers continue looking for the body of the other missing man, passing along recovery skills from one generation to another. The effort is happening during one of the coldest weeks along the Kuskokwim River this winter, with wind chills reaching minus 30 degrees Fahrenheit. 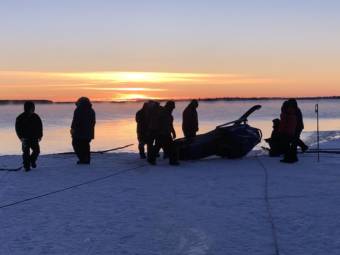 Two men, Peter Sallaffie and Joseph Hale, drove into an unmarked open hole in the ice near Tuluksak. The loss marks the first deaths to open water along the Kuskokwim River this winter.