President-elect Joe Biden has chosen Congresswoman Deb Haaland to be the next secretary of Interior.

The New Mexico Democrat is a member of the Pueblo of Laguna tribe. If confirmed by the Senate, she would be the first Indigenous American to serve as a cabinet secretary.

“Everyone’s working at home yet we could still hear the reaction going across the country, so that gives you a pretty good idea,” said Trahant, a former UAA professor who is a member of the Shoshone-Bannock. “If you think about the history of the country, it’s so rare to have real representation, as in secretaries of agencies. Zero. So this is a big moment.”

The Interior Department employs about 70,000 people and encompasses vastly divergent sub-agencies. One is the Bureau of Indian Affairs.

La quen náay Liz Medicine Crow, president of the First Alaskans Institute, said the Department of Interior is still repairing its relationship with tribes after eras of contempt and abuse.

“So to have a Native person, who has lived that life, who understands what it means to be a Native person in this country, to come from a small community, to be a steward for thousands of years for our homelands — that’s what we have in Congresswoman Deb Halaand,” Medicine Crow said.

Interior is hugely important in Alaska and other Western states for the 500 million acres of land it manages. Interior is the parent of the National Park Service and the U.S. Fish and Wildlife Service. Its mission is to preserve nature. It also includes the Bureau of Land Management, which leases land for mining and drilling. BLM is scheduled to auction off drilling rights in the Arctic National Wildlife Refuge just two weeks before Biden becomes president.

Haaland has voiced passionate opposition to drilling in the Arctic National Wildlife Refuge. As a congresswoman-elect in 2018, she spoke at an anti-drilling rally in front of the U.S. Capitol.

“I’m here to support my family in Alaska. To protect the Arctic Refuge. To protect the animals and the trees and everything that lives there,” Haaland said then. “Because not everything should be based on how much money we can make.”

She meant “family” in a broad sense. The rally was organized by Gwich’in opponents of drilling.

Last year, Haaland co-sponsored a bill that would have blocked the BLM from holding a lease sale in the Arctic Refuge.

“Oil and gas drilling puts at risk the Porcupine caribou herd, which has sustained tribes for centuries and centuries,” Haaland argued on the House floor. “It also threatens wolves, polar bears and migratory birds that live in the refuge, and will release carbon dioxide into the atmosphere, exacerbating the effects of global warming, which have affected Alaska far more than any state in this country.”

Alaska Native groups are on both sides of development in ANWR. Some, particularly on the Arctic Slope, say they need the jobs, and they say drilling and caribou can co-exist.

Despite Haaland’s opposition to one of his long-held goals, Alaska Congressman Don Young has praised her and called her a friend. They worked together on bills to provide contracting opportunities for tribes and to restore buffalo herds.

Young’s office did not respond to an interview request Thursday. 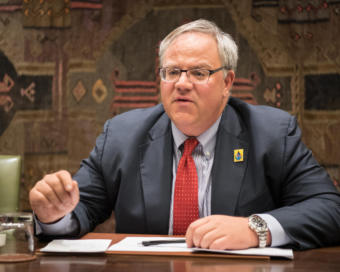 David Bernhardt previously worked as a lobbyist for several energy companies. He also represented the state of Alaska in 2014 in an unsuccessful lawsuit over seismic testing in the Arctic National Wildlife Refuge.