Congress appears committed to sending another round of coronavirus relief. Negotiations are ongoing, but consensus is building for $300 weekly payments to the unemployed, and direct payments to most Americans.

“It would be somewhere on the $600 to $700 per individual, and then obviously double that for family and kids,” Senate Republican Whip John Thune said Wednesday.

Sen. Lisa Murkowski is one of the so-called “gang of moderates” who insisted Congress had to pass something before departing for Christmas.

“This is not just paper,” she told reporters, tapping a ream of paper the moderates’ $908 billion bill is printed on. “This is hope.”

Murkowski said she thinks about the Alaskans who have lost their jobs and worry about how they will stay in their homes. She said she’s heard of some who are so new to being in need, they don’t even know how to seek assistance.

“They’ve always worked hard. They’ve always paid into the system. When they’ve gone to the food bank, it’s because they’ve been a volunteer. They’ve been packing boxes. But they’ve never been a recipient.” Murkowski said. “I think about what that means, what that means to a family’s pride. … ‘I don’t even know where to go, but my family is hungry.’”

One thing in the compromise bill Murkowski endorsed that may be dropped in the final version is $160 billion for state, local and tribal governments. Murkowski said it’s emergency funding and would, among other things, help local governments avoid laying off of first responders.

And she said, it would send $8 billion to tribes, which would be important for Alaska.

Lisa Aquino, chief executive of Catholic Social Services of Alaska, said food banks are seeing unprecedented use. Lines form at St. Francis House Food Pantry in Anchorage, and Aquino says they try to serve the clients as quickly as possible.

“Because they also probably need to be looking for a job or watching their kids while they do school … . But food is one of those basic needs, so you’re going to get that done first,” she said. “Just to think of that stress, and there’s just so many people we’re seeing like that now.”

Aquino said she hopes Congress does send pandemic relief funds to the state and municipalities, some of which flows to nonprofits and to the clients they serve.

Congress will likely bundle the coronavirus relief into the larger bill that keeps the government operating. It must be passed by Friday to avoid a government shutdown. 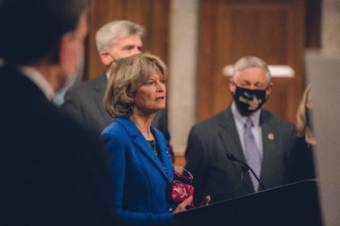 Moderates in Congress like Sen. Lisa Murkowski may finally be having their day. Or so it would seem, with a COVID-19 relief bill gaining momentum after months of partisan stalemate.

Frustration and impatience with Congress is building among out-of-work Alaskans and local leaders, who say the lack of a social safety net has made it far more painful to maintain the health mandates aimed at limiting the spread of COVID-19.