The post offices in Kwethluk and Pilot Station have been closed for weeks because employees were infected with COVID-19. The closures have threatened people’s health.

As of Dec. 3, the Yukon-Kuskokwim Health Corporation has announced 323 cases of COVID-19 in Kwethluk, a village with between 700 and 800 residents. Among those that have tested positive are the employees of the post office. Kwethluk administrative assistant Lillian Michael said that the post office has been closed for almost two weeks because the employees have been self-isolating.

“It’s negatively affecting everybody,” said Kwethluk resident Ana Kelila. “That’s the only way we can get anything around this time because, you know, the rivers freezing and all this pandemic stuff going on.”

In the summer or later in the winter, Kwethluk residents can travel by river to Bethel to obtain goods. But before the river is completely frozen over, and at a time when most communities are discouraging or restricting travel, Kelila said that isn’t possible. One of her biggest concerns is the elders in her community.

“Elders get their checks in the mail. That’s the biggest thing. They don’t have any, like, money to get what they need because most elders don’t have bank accounts and they still do stuff the old fashioned way with checks,” Kelila said.

Then, there are people who need their mail to stay healthy. Elia Epchook Jr. is recovering from back-to-back bouts of strep throat and COVID-19. He said that he is waiting on a shipment of antibiotics and an inhaler to treat his strep throat. But in the meantime, he is doing as his ancestors did.

“I’ve been using traditional ecological knowledge on medicine craft,” Epchook Jr. said. “My uncle had given me some pine needles, and I used that to inhale the evaporating boiling pine needles.”

Epchook Jr. said that the traditional remedies are working. If they hadn’t, he said that the Yukon-Kuskokwim Health Corporation is able to send medications directly to the health clinic. But for some people in some places, that’s less of an option.

In Pilot Station, the post office was also closed for about two weeks because workers caught the coronavirus. Brian Stephanoff, who lives in the village, said that he ordered a refill for his son’s asthma medication.

“We were down to our last, last few pills,” Stephanoff said. “We had to try to stretch whatever medication we had.”

The refill he ordered was stuck at the post office for weeks. Stephanoff said that the reason he didn’t order another shipment to the village clinic was that he wasn’t sure they would arrive before the post office would open. Recently, a medevac plane on its way to Pilot Station was delayed for days because of the weather. Plus, he said, with the COVID-19 cases in the village, he didn’t want to risk infection by going to the clinic.

“I got a little worried cuz I wasn’t sure what I would have to do,” Stephanoff said.

The Pilot Station post office opened back up earlier this week, but Stephanoff still hasn’t been able to get his son’s medication. He said that the post office has only been passing out large packages to try to clear out space.

“Because after a couple of weeks all that mail backed up, and finally getting over here, it filled up all the way up to the front entrance area,” Stephanoff said

He said he might ask the recovered post office employee to try to dig out the pills for his son. 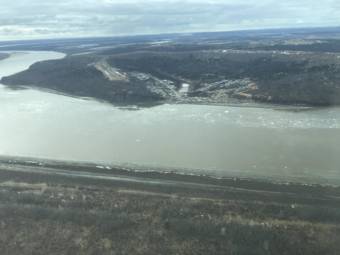 Unable to reach hospital because of weather, Pilot Station man dies of COVID-19

A 37-year-old man in Pilot Station died from COVID-19 at the village health clinic in late November before he could be transported to a hospital. Stormy conditions prevented a medevac from reaching him, his family said.