Juneau skiers and snowboarders will have to wait at least another week to hit the slopes at Eaglecrest Ski Area. Opening day, which was scheduled for Saturday, has been postponed.

General Manager Dave Scanlan says they want to keep customers safe and preserve the snowpack until it gets colder and drier on the mountain.

On Tuesday night, the ski area received between 8 inches at the base and 16 inches of fresh snow at the top. Groomers packed the snow down to preserve it before temperatures rose and seven inches of rain fell on the ski area.

Still, Scanlan says the snowpack at the base shrank from 30 to 19 inches as a result of this week’s wind and rain.

Previously buried rocks, stumps and other hazards are now exposed. Mud and debris is also covering the snow in some areas. The slopes are saturated with rainfall and not suitable for skiing and snowboarding, or even machine grooming.

Although the lifts will not be operating this weekend, the ticket office will be open for printing season passes. The rental shop will also be open for equipment pre-fitting by appointment. 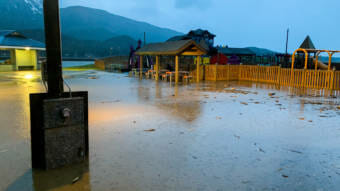 City workers are working to clean up mudslides and mitigate flooding in several parts of Juneau.