The regional Native corporation for Southeast Alaska upped its income by $50 million in 2014. Officials at Juneau-headquartered Sealaska say it’s the start of a multi-year recovery.

The corporation’s 2014 annual report, which was just released, paints a much brighter picture. It says profits totaled almost $15 million, with growth coming from its service sector.

“We believe 2014 was a great turnaround that created a stable platform to lead to the progress that we need for the corporation,” he says.

But right now, it’s not looking that bright.

Without that money, from a northwest Alaska mine and North Slope oil development, Sealaska is $9.5 million in the red. Official numbers are lower, because some corporate expenses aren’t counted as losses. 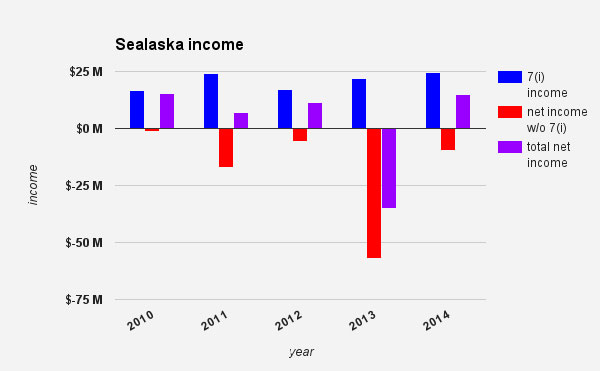 The result is the smallest amount of business and investment income going to shareholder dividends in about a dozen years.

CEO Mallott says that will change.

“Stable, increasing dividends is what we want to build toward. 2013 will be a drag for a few more years, for sure,” he says.

Sealaska expects growth in its timber subsidiary, which had almost closed down.

Congress last year passed a controversial lands bill turning over 70,000 acres of the Tongass National Forest. Sealaska Timber Corp. is logging its first parcels from that package now, on the Cleveland Peninsula and Prince of Wales Island.

“There’s a lot of infrastructure they’re going to put in place, new roads and buying more gear, getting ready for this new life, that they’re going to have going forward, It’ll be profitable but not at the levels we want to see as we go forward,” he says.

Sealaska is in looking to make some significant new investments. It sold off its profitable plastics partnership and a smaller company to help fund new acquisitions closer to home.

He says the corporation also made internal cuts. It reduced its workforce of 400 by more than a third. And it paid no management bonuses.

Morris says the board of directors also made cuts, including a costly health-care credit.

“They eliminated that as well as put a cap on what their fees can be for the year. So now, they can only make up to their cap, which is below what some of the fees had been over prior years,” he says.

Critics says executives – especially those who retired – were overpaid, an undeserving reward for what they call poor management.

Mallott took over as CEO last June, replacing Chris McNeil Jr., who stepped down. The board reorganized about the same time with a new chairman, Joe Nelson of Juneau.

Five incumbent board members are up for re-election this year. They’re being challenged by an equal number of independents.