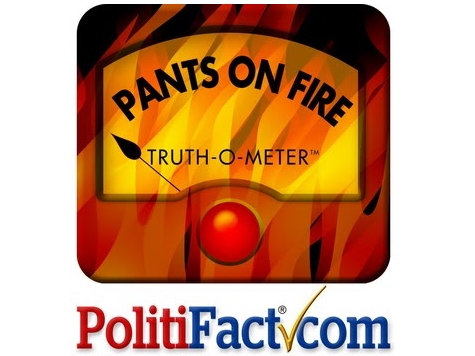 The fallout continues after U.S. Sen. Mark Begich aired a campaign ad blaming his opponent for a sentencing error that freed a sex offender now charged in a 2013 double homicide. The independent website Politifact gave the ad a rating of “Pants on Fire” – its lowest score.

The website, sponsored by the Tampa Bay Times, sided with Republican Dan Sullivan, a former state attorney general. Sullivan says the mistake leading to the sex offender’s short sentence occurred before he was appointed to be the state’s top lawyer.

The Begich campaign pulled the ad after the victims’ family complained, and Sullivan also took down his rebuttal ad.

A Begich spokesman alleged Sullivan is responsible because a prosecutor working under him signed a plea deal in 2010 for an inappropriately short sentence.

A later Department of Law review of the case said the state lawyers, the judge and the Corrections Department all failed to see the suspect had a prior felony from 2007, which would have increased the presumptive sentence in 2010 to at least eight years. Instead, the man was freed and, in 2013, accused of killing an elderly couple in Anchorage and sexually assaulting a toddler.

Politifact called it highly unlikely that Sullivan was personally involved in the plea agreement. It also concluded he was not responsible because the sentence was based on an inaccurate state record created before Sullivan became attorney general.

Though the ad is no longer on air, national pundits and Republican political operatives continue to draw attention to it, calling it a blunder that could damage Begich’s re-election bid.