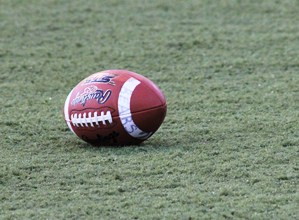 The Juneau-Douglas Crimson Bears and North Pole Patriots football teams are playing in the medium schools football division this year.

Both schools have played in the Cook Inlet and Railbelt leagues for large schools; now they compete in the Southeast Conference against Ketchikan, Sitka and Juneau’s Thunder Mountain.

“There’s not many conferences left, so we’re kind of making the rounds through all of them.”

Head coach Rich Sjoross has seen JDHS enrollment fall from a high school with nearly 1,800 students to less than 700.

North Pole High School near Fairbanks also has a dwindling enrollment. Head coach Richard Henert says it’s down to about 740 students this fall.

“Ultimately it came down to the fact that ASAA has a cut off and we’re below that cutoff. “

In 2011, the Alaska School Activities Association added a third football division for schools with enrollments of 326 to 800 students.

ASAA is the sanctioning organization for athletics and other activities.

“A lot of the smaller schools could never, ever beat the medium schools.  Just like the medium schools have a harder time beating like the Bartlett, Chugiak and Dimond’s. That was kind of the reasoning behind the division,” Freeman says.

For years, Juneau and North Pole competed at the top of the large schools division. They made the state playoffs several times; JDHS won the championship twice in the last decade.

Both schools opted to stay in the Railbelt for the first two seasons after their size shrunk.   Now it’s hard for JDHS and North Pole to compete with the large schools from Anchorage, Fairbanks, and the MatSu.

Where once there were 70 to 80 Crimson Bears, 47 boys signed up this season, says coach Sjoross.   There’s little depth.

It was predictable, Sjoross says, when TMHS was built and started its own football program.  “You knew the numbers were going to decrease and something was going to have to happen, and money was going to get tighter and that kind of stuff,” Sjoross says.  “So I think we’re making the most of it.”

Thunder Mountain also has about 47 players.  The Falcons have been in the Southeast Conference since the team formed five years ago.

While North Pole still has a lot of kids going out for football, Coach Henert calls the move to the SEC realistic.

“Pretty much one out of every three boys that go to North Pole High School plays football.  We get a lot of bodies out.   Whereas West Anchorage, they have so many kids it’s probably one out of every 10 to 15 boys that plays of football, but it’s the biggest boys in school that play football,” Henert says.

He says making the move was a tough issue for coaches and players.

“You never want to play down, so to speak.  Those that are competitive want to step up to challenges.”

“We’d like to see programs like Sitka and Ketchikan grow and we hopefully can advocates in the conference there, and maybe help them out and find ways to make football better in Alaska,” Henert says.

Crimson Bears’ Coach Sjoross says the medium schools division, which includes the Northern Lights and Southeast conferences, may be the one to watch this season.

In the Southeast, however, Sitka will not to play JDHS and North Pole.  That leaves only four SEC teams and eight weeks in the regular season, so the two stronger teams have scheduled games against some of Alaska’s tougher squads from other conferences.

JDHS players say they’re comfortable in the SEC, especially since the schedule does offer them more competition.  The motto this year, says running back Demetrius Campos, is the same as when they played the bigger schools: