It’s not every day that an entomologist discovers a brand-new insect. And University of Alaska Fairbanks graduate student Jill Stockbridge wasn’t even looking for one.

She was on northern Prince of Wales Island, happily collecting bugs for her master’s thesis, which focuses on how logging practices affect beetles and spiders. Stockbridge used a couple different kinds of traps to gather her bugs, and then took all the samples back to Fairbanks to sort and study further.

That’s when she found it. Again and again. A mystery bug.

Stockbridge said her adviser, Derek Sikes, was out of town at the time, so she just set the unknown bug aside. When Sikes got back, Stockbridge brought out the insect.

“His impression was that he was kind of disappointed in me, and just telling me, ‘Well, at this point in your career, you should know exactly what you’re looking at. I felt kind of ashamed,” she said, laughing. 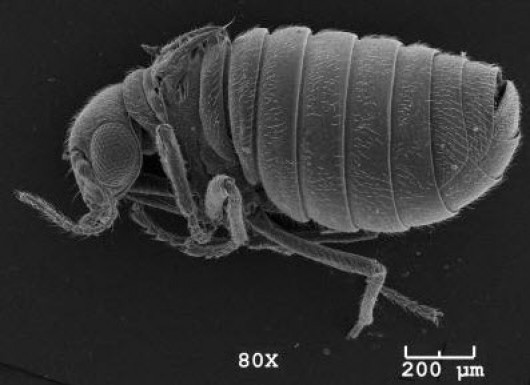 Sikes, an entomology professor and curator of insects for the UAF museum, admits that he was a little surprised that Stockbridge couldn’t figure it out.

“I said, ‘What? You don’t know the order?’” he said. “And then I look at it, and I wasn’t sure what order it was. That’s just a real shocker for an entomologist to not really know what order something is.

With so little information about this insect, they turned – like many of us do these days — to social media. Turns out, there’s a bunch of other bug experts who are on Facebook, and often use that tool to identify critters. So, Stockbridge and Sikes posted some photos, and eventually were able to identify the genus, Caurinus.

“Then we started figuring, there’s only one species known from this genus, Caurinus dectes,” Stockbridge said. “But since that was found in Oregon and Washington, and that’s a little over a thousand kilometers away from POW, we started thinking, ‘Maybe we have a new species, so we should start doing some work on it.’”

They did some genetic comparisons, and found a 7-percent difference, which Stockbridge said is in the “gray area” when determining whether you’re looking at a separate species. Then they examined it under a microscope to look for clear physical differences, but that didn’t really tell them much, either.

“So, I signed up for a scanning electronic microscope class,” she said. “That’s a type of microscope that lets you get really up close to these insects so that you can try to find really tiny differences.”

With the help of that extreme close-up view, Stockbridge determined that the two species do have some obvious differences. The males have different numbers of lenses in their eyes, and the females from Prince of Wales have a shallow notch on their bodies, while the Oregon version has a deep notch. It’s not a huge difference, but it’s enough.

“At first I wanted to name it after myself,” she said. “But then my adviser was like, ‘That’s kind of arrogant.’”

So, they decided to honor the Native tribes of the island, and use the Tlingit word for “ancient,” tlagu; an appropriate name for a very old species.

At first glance, the tlagu could easily be mistaken for a flea – they even hop when you touch them — but don’t worry. They eat liverwort, a moss-like vegetation, rather than blood. Sikes said the similarities are striking enough that the new bug might be a long-lost relative of the modern blood-sucker.

“It’s about the same size as a flea, shape, color, but it’s not a parasite,” he said. “It’s a wild, plant-feeding, probably close relative to the fleas.”

He said they sent some samples to another lab, which will look more closely at the possible relationship.

Sikes noted that this new bug is among 300 species of arthropods that are found only in Alaska. More than that: So far, Caurinus tlagu has been found only on Prince of Wales Island. But, he said, now they know what to look for, and how to collect it.

“So now that we know how to find them, we can expand the search, and look at other islands in Southeast, look on the mainland, and just see how far and wide it’s distributed,” he said. “I expect it’s distributed much wider than the north of Prince of Wales where we found it.”

POW does have some special characteristics, though. Some species found there suggest that when the rest of Southeast was buried under ice, there were pockets of open land, allowing bugs – such as the Jurassic-age Caurinus tlagu – to survive glaciation.

Stockbridge collected the bugs over four summers. The last summer, they had the help of Lauren Russell, an entomologist who identified the Oregon version of Caurinus.

During her annual trips to POW, Stockbridge stayed in Coffman Cove, which she said welcomed her warmly.

The people there are super nice, and anytime I visit there, they say, ‘Oh, the bug lady is back!’ So that’s my name down there. The bug lady.”

The bug lady says that the discovery of Caurinus tlagu will form an interesting chapter in her master’s thesis, which she hopes will be done in time for her to graduate next spring.