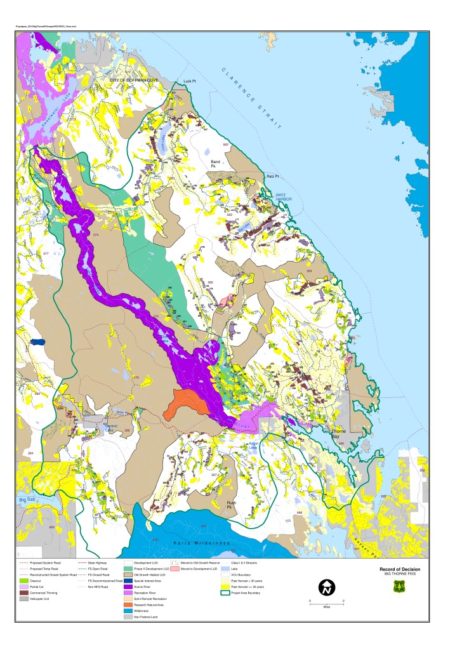 Tongass National Forest Supervisor Forrest Cole announced the Record of Decision for the Big Thorne Timber Sale during a teleconference Monday afternoon. The ROD calls for a harvest of nearly 150 million board feet, coming from more than 6,000 acres of old growth and more than 2,000 acres of second growth forest on Prince of Wales Island.

Some welcome what they say is a needed supply of timber to keep local mills operating. But a regional conservation group criticizes the plan, which it predicts will harm habitat for wildlife.

One hundred and fifty million board feet is a big timber sale. As Forest Supervisor Forrest Cole points out, that’s potentially good news for loggers and mill operators, like Viking Lumber outside of Klawock.

“The Viking mill harvests about 23 million a year, so this could be, if they were successful bidders on the project, this could be a substantial boost to their supply,” he said.

But, the size of the sale is not good news for conservationists who are worried about wildlife habitat. Bob Claus is with the Southeast Alaska Conservation Council.

“This is a huge sale. It’s double the size of the last biggest sale since the pulp mill era, and it’s just a continuation of the too-much-logging-too-fast policies of timber management on the Tongass.”

The harvest area includes timber stands near Coffman Cove and Thorne Bay. It allows construction of 46 miles of road, which includes reconstruction of about 36 miles. According to the Forest Service, none of that harvest would take place in inventoried roadless areas.

Cole said the sale could provide up to a decade’s worth of timber for mid-size mills like Viking, and it sets aside acreage for smaller operations.

“In this project, we’ve put up about 842 acres for small sales,” he said. “That’s somewhere in the neighborhood of 20 million (board) feet, which is a huge supply for them.”

He said that when making the decision, he considered public comments, and other factors, such as wildlife and economic needs. He estimates that the project could generate nearly 700 jobs.

The selected alternative was modified to mitigate some wildlife habitat concerns by reducing some of the old growth and winter harvest, and it keeps the roads open following the harvest for up to five years, rather than closing them immediately. POW residents have expressed frustration over the closure of old logging roads, which provide easier access for hunting.

Cole adds that this sale will give everyone time to figure out how to make a second-growth timber economy work.

“By providing a stable supply of timber to the industry now, we are giving the Forest Service and the industry the breathing space needed to transition to the young growth timber in the future,” he said.

The large amount of old growth included in the ROD is of particular concern to Claus and SEACC.

“For us, the habitat is almost synonymous with old growth, and the remaining reserves inside the Big Thorne project area are the places where we need to keep for deer habitat in particular,” he said.

The ROD announcement marks the start of the appeal process. Claus said it’s too early to say whether his organization will appeal the decision.

“With the scale of this timber offering, we’ll be looking very carefully at it,” he said. “At least we’ll be trying to clarify some details, but I don’t know exactly what process we’ll be using.”

Cole said he’s confident there will be appeals. They could delay the process, especially if those appeals aren’t resolved and lead to lawsuits. However, if all goes smoothly, “We hope to advertise this project around the middle of August and have a bid opening the middle of September, and if we can achieve those two objectives, we could potentially award this project by the end of September.”

In that case, logging could commence as early as this year.

For more information, go to the Forest Service’s Tongass website.